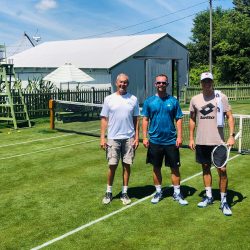 Beginning today, July 31, and running through Aug 1, players and administrators representing Berks County and Pennsylvania are taking to the tennis courts for the ‘Court of Dreams Comeback Classic’ event from the All Iowa Lawn Tennis Club from Charles City, Iowa.

LIVE STREAMING WILL START AT 10am today, Friday, July 31. HOW TO LIVE STREAM

Ryan Knarr will be directing the final event of the Comeback Classic Series which started as a way to bring back LIVE sports back in a safe with with Live Streamed matches on the Small Player Big Play app. Starting with an private men’s and women’s event in a secret location in Berks in June for Men’s and Women’s, followed by an entire Comeback Classic series with stops Berks County Tennis Club, the Summer in the City at Hampden Park and the King and Queen of Clay Court Championships at Orwigsburg and Kutztown respectively, the prize money events were a regional way to bring back the first tennis events on the East Coast during the pandemic.