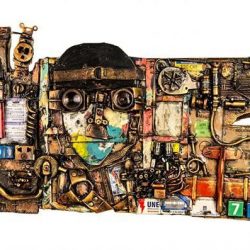 READING, PA – GoggleWorks Center for the Art (GoggleWorks) welcomed visiting artist Julio C. Cepeda Duque to the campus and his personal studio space for the duration of his visit. The artist, hailing from Cuba, is preparing for his first international solo exhibition, Made in Cuba, as well as a public workshop on assemblage art, and completion of a permanent mural installation on the exterior of GoggleWorks’ warm glass and metals studio.

Cepeda was born in 1973 in the town of Jarahueca, in the province of Santi Espíritus, Cuba. His training began in 1995 in the workshops of the artist Julio Neira, a painter and sculptor  from the city of Santi Espíritus. In 1997 he entered the professional art academy Samuel Feijoo in the city of Santa Clara, graduating in 2000. His thesis addressed the function of abstraction within the aesthetic. After graduation he was a professor at the Raúl Martínez Academy for one year.

From 2008 to 2010 Cepeda created art independently in Havana, then moved to Trinidad in 2010, where he works with another group of artists with similar concerns. Several collective and personal projects have resulted including preparation for Made in Cuba, with the support of the Julio Cepeda Exhibition Committee, led by local artists, Martha and Jay Ressler.

“Made in Cuba is created both physically and conceptually with pieces of Cuban reality, inspired by fragments of daily routine on the Island. I want the viewer to understand Cuban experience. I hope my art will have that magical touch: to establish involvement with the viewer, to better understand Cuba through this experience,” explains Cepeda.

Made In Cuba will be on view in Cohen Gallery (east) from September 7 through October 13, with an opening reception with the artist on September 7, from 5:30-7:30pm, during GoggleWorks’ monthly Spotlight Night event, where Cepeda will be present.

Cepeda will also be teaching a two-day workshop (bi-lingual in Spanish and English), Assemblage Art on September 8 and 9 at GoggleWorks. Students will be able to work directly with the artist to design and create their own sculptural piece from found objects. Advanced registration is required here.

In addition to the exhibition and workshop, Cepeda will be creating and installing a permanent mural on Building 6 of GoggleWorks’ campus with the help of GoggleWorks Studio Artists, the Julio Cepeda Exhibition Committee, and community volunteers. The mural, composed of found objects that have been collected over the past year by the committee, will be created in Cepeda’s signature style of assemblage.

“What most people see and understand as trash, for me, is raw material. One man’s trash is certainly my treasure. But the collections of materials I use isn’t just limited to trash. I search in the showrooms of mechanics, plumbers, electricians and other workplaces simply because it inspires me to make unique pieces. People I know offer me objects that have been a part of their life: things like old cell phones, broken headphones, and used watches. This generates a certain interaction with the spectator who recognizes their old possessions, sees that they have been a part of this process, and realizes that pieces of their daily life have now become art,” says Cepeda.

Guests can also visit Cepeda in his studio during this year’s Arts Festival Reading, held on October 6 and 7, where he will be demonstrating and selling his work.