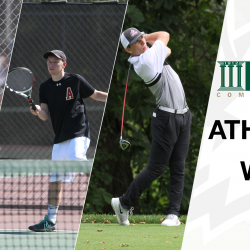 Annville, Pa. (Oct. 8, 2018) – Alvernia Seniors Amanda Phillips, Todd Unger, and Freshman Luke Fagley were named MAC Commonwealth Players of the Week for their performance from October 1 – October 7, as announced on Oct. 8 by the MAC Office.

Phillips went 4-0 combined at No. 1 singles and doubles to lead Alvernia to a 2-0 week. The senior lost only two games in both of the Golden Wolves matches. Phillips won both of her doubles matches by a score of 8-0 against PSU Berks and Cabrini. In singles action, Phillips beat PSU Berks’ top player 6-0, 6-2, and Cabrini’s No. 1 by a score of 6-0, 6-0. Phillips is the second straight Alvernia Women’s Tennis player to earn MAC Commonwealth Player of the Week honors. Junior Ariana Chuprinsky earned the honor for Alvernia last week.

Unger earned two points for the Golden Wolves in Alvernia’s 7-2 win over Gwynedd Mercy. In No. 2 doubles, Unger earned an 8-2 win with playing partner Kevin Angeles. Unger then went on to win his No. 3 singles match by a 6-0, 6-0 straight set decision.

Fagley started off his week with a tie for sixth-place at the Muhlenberg Invitational, shooting a six-over 75 at Lehigh Country Club. The freshman followed that performance by winning a point for Alvernia in the Yocum Cup vs. Albright in the No. 2 singles match. Fagley beat Pat Lord 3&2 at LedgeRock Golf Club. Fagley was just two-over par through 16 holes before winning the match.