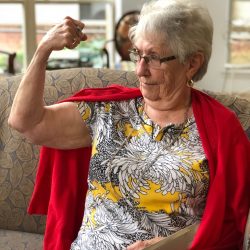 READING, Pa. – September marked the 79th anniversary of the beginning of World War II. During this time, propaganda was created to encourage women to join the workforce. A symbol of this effort was portrayed as Rosie the Riveter. But, she became more than a recruitment tool. She was an icon of strength and resilience. She was the face of women working to support their families and their critical contributions to the war effort.

So, it’s no surprise that Dolly Drumheller, a resident a Manor at Market Square, had once brought this persona to life during the Mid-Atlantic Air Museum’s World War II Weekend.

“It was so important to have Rosie as part of the show,” emphasized Drumheller.

Drumheller was the first woman to portray Rosie the Riveter during the weekend event held at the Reading Regional Airport in Reading, Pennsylvania, which features history reenactors, vintage wartime aircrafts, military vehicles and artifacts, as well as 1940s era fashion and entertainment.

She would go on to portray Rosie for about 10 years. During this time, she enjoyed sharing the spotlight with Jesse Sychterz, her granddaughter and also known to spectators as Little Rosie. The pair would take the stage together sporting fitting attire, and adorning the famous bandanna, which Drumheller made.

The appreciation for the Mid-Atlantic Air Museum was a family affair. Her husband, Robert, was a Korean War Veteran, who was a naval airplane mechanic. He was gifted a membership to the museum by their son. Robert soon began volunteering and later Dolly would become involved.

She was delighted to share that Jesse is still actively involved at the museum and helps with the fashion show and setting up the Home Front House for World War II Weekend, something the pair also did together.

When asked about how she felt portraying one of the most iconic images of working women, during a time when she was not old enough to work, Dolly noted “she was a powerful persona, and I felt empowered by portraying her. I knew Rosie was someone significant and I’m glad I was able to share the experience with my granddaughter, and those at World War II Weekend.”