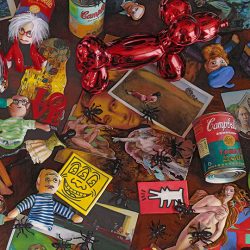 One of Scheuring’s most ambitious paintings on view is the 36” x 60” work titled, “We Are.” Scheuring documented 55 iconic–and sometimes surprising–images that anyone associated with Penn State University will recognize.

He was a relatively self-taught artist until his last year in college. At that time, he enrolled in a painting class at Penn State University Park, and immediately fell in love with the medium of oil. “The ability of oils to capture subtle contrasts in light and temperature pulled me into a concerted effort to learn, understand and explore this medium,” comments Scheuring.

For the last 12 years, Scheuring submitted his paintings to exhibits and has received prestigious awards and commissions. In addition, has also illustrated numerous magazine covers, and had had his paintings converted into jigsaw puzzles.