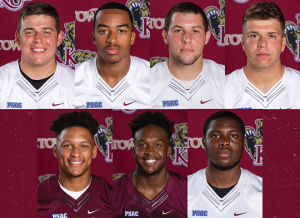 Reynolds, the program’s career rushing touchdown leader with 35, carried the ball 172 times for 823 yards and 15 scores during his final season in Maroon and Gold. His 15 TDs on the ground are tied for the second most in a season all-time at Kutztown. The Willow Grove, Pennsylvania product also totaled 40 receptions for 472 yards and three TDs, while adding 380 yards in the return game to finish with 1,675 all-purpose yards.

A three-time Don Hansen All-Super Region honoree and 2018 All-PSAC East First Team pick, Reynolds ranked fourth in the conference and 16th nationally with 152.27 all-purpose yards per game. He is second in career all-purpose yards at KU (5,277) and third in rushing yards (2,650).

Cella, of Secane, Pennsylvania, started all 11 games for the 9-2 Golden Bears this past season. He earned All-PSAC East First Team recognition after being named Second Team in 2017. Cella and the offensive line were crucial to one of the most prolific offenses in Golden Bear history. Kutztown’s 471.1 yards of total offense per game ranked third all-time, while the team’s 30 rushing touchdowns were a single-season record.

DiGalbo topped the conference in total offense at 302.3 yards per game and was second in completion percentage (64.7%), while ranking in the top 12 of NCAA Division II nationally in both categories. Also a native of Secane, DiGalbo threw for a career-high 2,470 yards and 15 touchdowns. He also ate up 553 yards on the ground and rushed for 11 touchdowns. The three-time All-PSAC East Second Team selection already sits fourth all-time at KU in completions (496) and passing yards (6,089), fifth in touchdown passes (44), six in pass attempts (785) and seventh in rushing touchdowns (23).

Cox-Cowan, a two-time Don Hansen All-Super Region pick, was credited with a team-high 14 pass breakups and 17 passes defended. The junior from Harrisburg registered a career-high 62 tackles (43 solo), 1.5 tackles for loss and ranked tied for second on the team with three interceptions. Cox-Cowan had a 29-yard interception return for a TD in KU’s 33-32 overtime victory at Edinboro on Nov. 10 in the regular season finale. The 2018 All-PSAC East First Team honoree’s 38 career breakups are nine shy of tying English Peay’s all-time record and his 47 passes defended five back of Peay’s 52.

Krcic, of Saylorsburg, Pennsylvania, has averaged better than 41 yards per punt over his first two seasons and currently ranks as Kutztown’s all-time leader at 41.97. He averaged 41.6 yards per punt, with 10 of 50 yards or more, and placed 12 inside the opponent’s 20-yard line this past season. An All-PSAC East First Team selection, Krcic is appearing on the All-Super Region 1 Third Team for a second consecutive season.

Kutztown’s seven representatives are one more than the former program record of six, set in 2016. Over the last three seasons, the Golden Bears have placed 18 players on the Don Hansen Football Gazette All-Region teams.