Reading, Pa. (Feb. 18, 2019) – Women’s Basketball freshman Jannelle Robinson and Men’s Volleyball junior Spencer Matthews were named Alvernia Athletes of the Week for their performance during the week of February 12 – February 17, 2019. 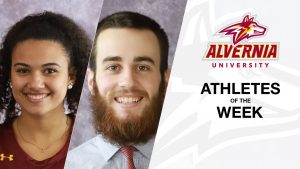 Jannelle Robinson averaged 13 points and five rebounds in an 0-2 week for the Golden Wolves. Against Albright, Robinson scored a career-high 16 points to lead all scorers, and had six boards on the night. She went 7-11 from the floor, and finished the game with five steals, two blocks, and an assist. Against Lebanon Valley College in Alvernia’s season finale, Robinson had ten points and four rebounds, and was a perfect 4-4 from the line. She also had three steals and one assist in 24 minutes of action.

Spencer Matthews averaged six kills and 20.5 attacks in a 1-1 week for Alvernia. Matthews had four kills on 22 attacks in a 3-0 loss to #4 Stevenson University on Wednesday. Matthews also had four digs, two blocks, and an ace on the match. In a 3-0 win over Neumann University, Matthews was one of three Golden Wolves to finish with eight kills. Matthews had 19 attacks and four aces on the night. Matthews helped Alvernia take control of the first set as the Golden Wolves scored 10 straight points on his serve.