Reading, Pa. (Mar. 18, 2019) – Men’s Lacrosse senior Andrew Ritchie and Women’s Lacrosse junior Brittany Defibaugh were named Alvernia Athletes of the Week for their performance during the week of March 11 – March 17. 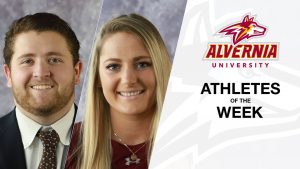 Andrew Ritchie helped lead Alvernia to a 1-1 week with a record-breaking performance on Monday with a 28-3 win against Medaille College. Ritchie finished the game with a single-game record nine assists, breaking his own record of eight assists set last year against La Roche. He also contributed six goals to help break the team record for goals scored in a game. In a 20-10 loss to Susquehanna on Sunday, Ritchie scored two goals and an assist to finish the week with a two-game total of eight goals and ten assists.

Brittany Defibaugh scored five goals and three assists for eight points in an 0-2 week for Alvernia. The junior scored two goals and added two assists in a 16-8 loss to Moravian on Tuesday. Defibaugh added three goals and an assist in a 15-14 overtime loss to Neumann on Thursday. Defibaugh also finished the week with two ground balls, six draw controls, and a caused turnover.