Reading Youth Rise Up! Against Violence

from Make the Road Pennsylvania 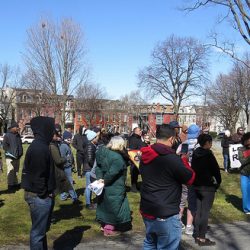 Over 50 community members of all ages and backgrounds took to the streets of Reading PA on Saturday, <March 23, to take action against gun violence. RISE UP READING! was organized by the students of Reading High School, Indivisible Berks, and Juventud en Camino to demand that local and state officials take immediate action to make the city of Reading a safer place. Chants of “Defend Kids, Not Guns” and “Enough Is Enough” rang out through the city.

Rashay Gonzalez, 25, is a former Reading High School student and activist whose stepsister was a student at Marjorie Stoneman Douglas High School in Florida last year:

“Listening to her cry on the phone with her knowing that her friends were dead… it got me thinking. It could have been her. It could have been me. I heard gunshots that killed a friend and classmate in 2010. Friends of mine were shot at a party in 2011. There were bullet holes where I had been standing. My life has been in danger every day. I showed up today because I’m tired of wondering when I would be next, when my sister would be next. I showed up because we need common sense gun laws and we need them now.”

Next steps are to move legislators to adopt common sense gun laws like Senate Bill 18, which would protect people that were involved in domestic violence. The groups are also demanding the end of police outsourcing so that officers actually understand the city.