LOUISVILLE, Ky. – Albright freshman pitcher Allison Melahn and junior utility Camille Sears were named to the NFCA All-East Region Third Team as announced by the organization on May 16. 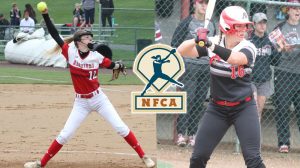 This marks the first time in program history that the Lions have had players named to the NFCA All-Region team.

Melahn was named MAC Commonwealth Rookie of the Year after going 16-6 with a 3.23 ERA in 27 appearances (23 starts) for the Lions including 14 complete games. The Gilbertsville, Pa., native was named MACC Pitcher of the Week for the week of April 15-21 after going 4-0 with a 2.57 ERA and helping Albright clinch their first postseason berth since 2007 with a sweep of Lebanon Valley.

Sears was also named to the third team and earned All-MAC Commonwealth First Team honors after hitting .409 with three home runs and a team-leading 38 RBI in 41 games, while ranking second on the team with 54 hits. The 38 RBI fell just one shy of the program record. Sears also appeared in 25 games in the circle for Albright and went 7-9 with a 3.99 ERA including a win in relief in the Lions’ come-from-behind victory over Alvernia in the MAC Commonwealth Tournament.

Albright finished just one win shy of the program record of 26 wins and embarked on a program-record 13-game winning streak that propelled the club to the No. 2 seed in the MAC Commonwealth Tournament. The Lions also advanced to the ECAC semifinals before falling to top seed Penn State-Behrend.