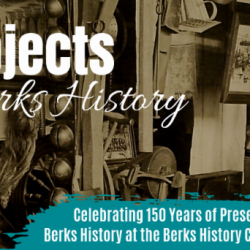 Since 1898, the Berks History Center (BHC) has been dedicated to building a groundbreaking collection of artifacts, artwork, manuscripts and library materials. Today, the BHC’s diverse holdings feature more than 20,000 objects related to all facets of Berks County’s rich heritage. Curated by BHC Curator, Bradley K. Smith in honor of the organization’s 150th Anniversary, 150 Objects of Berks History will showcase 150 rarely-seen items from the BHC collection that tell compelling stories of Berks County’s unique past. Thanks to a generous donation by the Focht Family Foundation, the BHC’s Palmer Gallery was newly renovated for the exhibit opening.

“This exhibit showcases an assortment of obscure artifacts that were discovered during the Collections Management Initiative, along with select items from our library collections,” says exhibit curator, Bradley K. Smith. “Because of the breadth of materials in the BHC collections, it was a challenge to select only 150 objects. However, each object helps to tell an important story about Berks County’s history, including stories about its people, its unique sense of community, its industries and commerce, its notable connections to national events, and of course, its commitment to valuing and preserving local history.”

The opening of the new 150th Anniversary exhibit coincides with a historic milestone for the organization: the BHC’s Charter Day Jubilee marks the anniversary date of when the organization’s charter was first signed in July, 1869. We invite you to join us for the opening of 150 Objects of Berks History at the BHC’s 150th Anniversary kick-off event, the Charter Day Jubilee, which will be held on July 12, 2019 from 6-9pm in the BHC Museum.

Party like it’s 1869 and enjoy an evening of enchantment and entertainment with BHC’s special “museum theatre” featuring historical characters and storytellers throughout the museum. Berks historical figures such as Widow Finney, Rhea Duryea, and George Durell will come alive and share their Berks history in the 13 galleries and exhibits of the BHC museum. Participants will also enjoy hors d’oeuvres, a champagne toast, a silent auction, special guests, and musical entertainment. A cash bar featuring a specialty “throwback” cocktail menu will be provided by Pollen Consolidated. Participants will also have an opportunity to enjoy BHC’s exclusive 150th Anniversary beer, brewed by Oakbrook Brewing Company.

Tickets to the 150th Anniversary Charter Day Jubilee are $25.00 and can be purchased by calling 610-375-4375 or online at berkshistory.org/event/jubilee. Food, musical entertainment, champagne toast, admission to the Charter Day museum theatre and the 150 Objects of Berks History exhibit are included in the cost of the ticket.