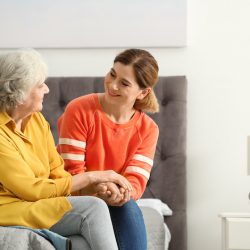 Family caregivers help aging family members remain in their homes, where most prefer to be.

HARRISBURG, Pa. – One-point-three-billion-hours – that’s how much unpaid time family caregivers in Pennsylvania devoted to helping aging family members and friends remain in their homes in 2017, according to a new report. The latest installment of AARP’s Valuing the Invaluable series says there are more than 1.5 million family caregivers in the Keystone State providing services valued at more than $18 billion.

Bill Johnston-Walsh, state director of AARP Pennsylvania, pointed out that 60% of them are also in the job market, so they could really use some extra help.

“We’re looking at tax credits both at the federal level and at the state level here in the Commonwealth,” Johnston-Walsh said. “We’re looking a paid family leave, and then also job flexibility.”

A paid family leave bill soon to be introduced in the General Assembly would give family caregivers paid time off to help care for a child, a spouse or an aging parent.

Johnston-Walsh said helping family caregivers actually saves money by allowing older adults to stay at home where most say they want to be, because the alternatives can be extremely expensive.

He said increasing the number of older adults who have access to state-funded services at home needs to be a top priority.

The last annual report estimated in 2016, family caregivers incurred an average of $7,000-a-year in out-of-pocket expenses in caring for their loved ones. Johnston-Walsh said he hopes these reports send a message and inspire legislative action.