Fun Facts About Thanksgiving From Turkey, Texas, to Pilgrim, Mich.

by Derick Moore, US Census Bureau 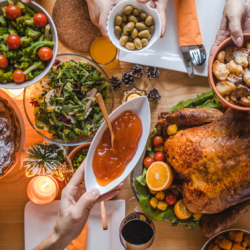 You May Also Like
Facebook Twitter Pinterest Email
Share
Nation Celebrates its 399th annual feast
In the fall of 1621, the Pilgrims — early settlers of Plymouth Colony — held a three-day feast to celebrate a bountiful harvest. Many regard this event as the nation’s first Thanksgiving.The Wampanoag Indians in attendance played a key role but historians have recorded harvest ceremonies of thanks among other groups of European settlers in North America, including the British colonists in Virginia as early as 1619.

There are several places in the United States that have the same names as either the holiday’s traditional feast or the early colonists’ arrival to the New World.

How many colonists were there? The estimated population in 1620 was 2,499 according to this table on page 25 of “Historical Statistics of the United States,” published in 1949 by the Census Bureau.

The legacy of thanks and the feast have survived centuries since the event became a national holiday on Oct. 3, 1863, when President Abraham Lincoln proclaimed the last Thursday of November as a national day of thanksgiving.

Decades later, President Franklin Roosevelt officially declared that Thanksgiving should always be celebrated on the fourth Thursday of the month to encourage earlier holiday shopping.

There are several places in the United States that have the same names as  either the holiday’s traditional feast or the early colonists’ arrival to the New World.

Seven share the name of the centerpiece of most Thanksgiving meals — the turkey — and have tiny populations:

Five places are named after the popular Thanksgiving side dish of cranberries:

Three are named after the Mayflower, the English ship that brought the first Pilgrims to the New World:

Two counties have Plymouth in their names as in Plymouth Rock, the landing site of the first Pilgrims:

Thanksgiving is a good time to reflect on how our founders enshrined in the U.S. Constitution the importance of statistics as a vital tool for measuring our people, places and economy.

Derick Moore is senior communications specialist at the Census Bureau.