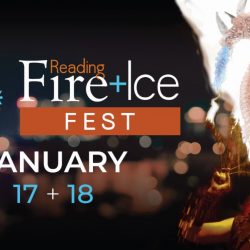 Reading, PA. – Reading Fire + Ice Fest, the premier regional winter festival, returns to downtown Reading for its sixth year. Produced and organized by the Reading Downtown Improvement District, with assistance from the GRCA, the festival will take place January 17-18, kicking off on Friday, January 17 at 5:30 p.m. in the 500 block of Penn Street.

The festival will once again feature a variety of both indoor and outdoor activities, including the Snowfall Bash, professional ice-carving competitions, fire performances, a chili & wing cook-off, live music, food trucks, vendor fair and the Fire + Ice Craft Beer Fest. Most activities will be free, with the chili & wing cook-off, Snowfall Bash, and Beer Fest having nominal entry fees.

During the day, guests can enjoy the artistry of ice carving and at night, the spectacle of fire dancing. In addition, fans of the free Downtown Alive concerts will be excited to see seven different music acts take the outdoor stage during the two day event.

Grab your hops and hand warmers, because this year’s celebration includes the first Fire + Ice Craft Beer Fest, bringing together the best local and regional craft breweries to downtown Reading. This tasting will be held under a tent in the State Office Building Parking lot in the 600 block of Penn Street on January 18 at 12 p.m. Each $35 ticket to the Craft Beer Fest will include a four-ounce tasting glass and a ticket to the chili & wing cook-off held in the same venue.

The annual Fire + Ice wrap up party, the Snowfall Bash, will be held in the DoubleTree by Hilton on January 18 at 7 p.m. This year’s theme will take a tour through the musical generations, with three bands playing music from the 70’s, 80’s, and now. Tickets are $10 for adults, $5 for students with a student ID, and free for children 5-years-old and under with a parent or guardian.

Broad noted that companies, organizations and individuals can sponsor custom-made ice sculptures as well as larger sculptures. Additional sponsorship details are available by contacting the Improvement District office weekdays between 8 a.m. and 4:30 p.m. at 610-3766424.

Reading Fire + Ice Fest is supported in large part by a generous grant from the Hawley and Myrtle Quier Fund of Berks County Community Foundation. “We’re gearing up to make the sixth Reading Fire + Ice Fest the best yet,” noted Broad. “Thanks to Berks County Community Foundation’s generosity and support, this signature event will provide great wintertime fun for everyone.”