Following a strong shooting performance and making a last second game-winning basket, Albright men’s basketball junior Samuel Majekodunmi was named to the D3hoops.com Men’s Basketball Team of the week, announced by the website on December 17. 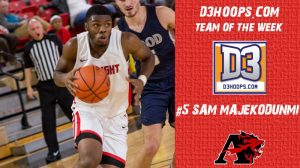 Majekodunmi scored 23 points on 7-of-11 shooting from the field and 3-of-5 from beyond the arc last Saturday in the Lions dramatic 78-75 win over Hood. However, his game-winning three-pointer with three seconds left in regulation was the biggest shot of the day to send Albright to the win over the previously unbeaten Blazers. Majekodunmi added three assists, two rebounds, and two steals in the game as well.

The Staten Island native leads the team and currently stands sixth among the MAC Commonwealth leaders in scoring with 16.8 points per game. He also currently sits ninth in the conference at 2.5 assists per game. His 23 points on Saturday was Majekodunmi’s third 20-point game of the season.

This is the first time in his collegiate career that Majekodunmi has earned a spot on the D3hoops.com team, and the first Albright men’s basketball player to earn a spot on the team since DeJuan Smith on February 3rd, 2015.