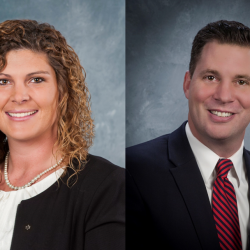 Peter Rowley, of Mohnton, been promoted to vice president in the Commercial Lending Group. He previously was assistant vice president. In his role, he is responsible for serving the financial needs of businesses using a consultative approach, personalized service and local decision-making.

Rowley joined Tompkins VIST Bank in 2017.  He formerly was a relationship manager with M&T bank. A graduate of Syracuse University, he completed a nine-month Relationship Management Sales Program and is a graduate of Leadership Berks.

Active in the community, Rowley is on the board of Prospectus Berco and serves on committee roles for the United Way of Berks County, as well as Alvernia University and its Center for Entrepreneurial Leadership.

Emily Myers has been promoted to assistant vice president and manager of the Leesport Branch. She previously was operations manager. In her new role, she is responsible the operations and growth of the bank’s small business and consumer relationships in the Leesport area.

Myers, of Shillington, has 16 years of financial services experience.  She joined Tompkins VIST Bank in 2006.  Previously, she worked at a predecessor bank of BB&T. Her professional education includes completing a number of banking courses through Tompkins VIST Bank.

Active in the community, she is a member of Greater Reading Young Professionals and Emerging Leaders United.  She also supports Opportunity House, Taste of Kutztown, Big Brother Big Sisters and Northern Berks Night Out.