from The Heritage of Green Hills 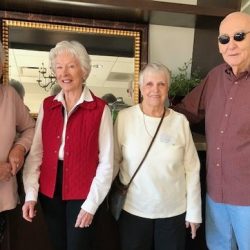 Love after 50 – With Valentine’s Day fast approaching, a group of four residents at The Heritage of Green Hills, a healthy life plan community in Shillington, Pa., gathered together to chat about the current romance in their lives.

From the Bridge Table to Rome

Heather Bittenbender, 77, who moved into The Heritage of Green Hills with her late husband 10 years ago, tried Internet dating after he passed away, but didn’t find a good match. “I met some nice men,” said Bittenbender, “but nobody really curled my toes.”

Still, she discovered that new love was in the cards last year: “I’m part of a bridge club in Reading and he plays in Lancaster. About 10 months ago, we met when he joined us after they closed down his Tuesday night game. He asked me to dinner, and we’ve been enjoying each other’s company since.”

She’s certainly someone who knows her own mind. When she met her current partner, “it was a mutual attraction and we went for it. No need to dilly-dally. Why waste time?”

And their time together has been exciting. Over the holidays, the mother of three and grandmother of four went on a cruise to the Mediterranean with her new friend. “Rome was very romantic,” she said, smiling.

Though Liz and Charlie Hill have been married for more than two decades, they found each other later in life at a time when they were both caregivers to ailing parents.

Charlie, now 77, was taking care of his father, while Liz, now 75, was caring for her mother and her two-year-old grandson. Neither had the time to go out to look for a partner, so they each signed up with a matchmaking service.

“This was before Internet dating,” Liz explained. “They interviewed me, took pictures and sent me some matches. Eventually I was connected to Charlie, who lived in Lancaster, while I was in Allentown.”

“Signing up with the matchmaker was the best money I ever spent,” Charlie added. “We ended up talking on the phone a lot.”

“He’s not a big talker on the phone, but he would talk my ear off,” Liz said.

“How we met in person — that’s a funny story,” said Charlie. “We finally decided to meet in person at an Arby’s to keep it low pressure.”

“I explained that I was blonde and that I’d be wearing my Boston University sweatshirt,” Liz interjected. “That’s how he could find me at the restaurant.”

“And I go,” continued Charlie, “and I see this lady in a Boston sweatshirt and I think ‘oh. She’s a lot older that I thought she’d be. Not like her picture.’”

“Liz was sitting behind another lady in the Arby’s, who happened to also be wearing a Boston sweatshirt. When I saw her, the real one, I was so nervous I started spilling my drink,” Charlie said. “That was October 3. We were married on April 10th the next year at my house, and my dad was the best man.

Roberta Lorenz, 81, met the man she’s seeing when she saw him sitting by himself in The Heritage of Green Hills’ more casual restaurant, The Tavern. “I’m the sort of person who feels for the person sitting alone. I saw a nice, quiet gentleman and decided to join him.”

They had a nice talk. A few months later, they went on a dinner date and they’ve been spending time together since.

“It’s been almost a year,” Lorenz explained. “We both love movies, so we watch many of them together here. And we go to the theater, museums and out to dinner, too.”

He also has been joining her at church services.

Lorenz loves to dance — she was a cheerleader in high school and has joined the “Heritage Hotties,” the community’s new silver poms cheerleading squad. But her friend needed some convincing to get out on the dancefloor with her.

“He really is a good dancer, but he’s reserved. It took a while, but now he dances with me readily. And he even asked me to dance recently.”

Love and Companionship at The Heritage

Cheryl Anderson, Well by Design Director, explained that The Heritage of Green Hills is especially welcoming to couples in that “we do not discriminate at all based on sexual orientation, legal marriage status, race or religion. Plus, residents enjoy our full-service bar and we love to have parties as often as possible. Most faith-based senior living communities do not allow this type of lifestyle.”

Every year, around February 14, Anderson hosts a singles party at the Heritage. “When I started it, I was in the same boat as many of the residents, having lost a spouse. But even though it’s a Valentine’s Day party, it isn’t about dating. It’s about building friendships. Many people aren’t interested in getting remarried or starting a big new romance, but would like to have a person that they can share dinners or watch tv with. Companionship is the most important part.”

The four assembled residents all agreed about the importance of companionship and Liz Hill added that there’s another type of love very important at The Heritage of Green Hills “The people here are family. If someone is ill, everyone else is supportive. When Charlie was ill, a neighbor handed me his own EZ Pass, to help me visit Charlie any time I wanted.”

Everyone had similar stories of little (and big) kindnesses that neighbors in the community showed to each other. “This isn’t just a place to live,” Liz said. “It’s home.”