Gentry Named to D3baseball.com Team of the Week

Following a strong opening weekend, Albright baseball senior shortstop Jimmie Gentry was named to the D3baseball.com Team of the Week, announced by the website on February 26. 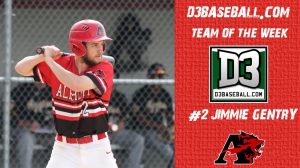 Gentry was tabbed to the shortstop spot on the team after batting .600 through the Lions first two games of the season against Marymount last Sunday. He went 2-of-3 from the plate with 4 RBIs, a home run, and scored two runs in the Lions 10-9 setback in game one. Gentry followed that by going 1-of-2 in the second game, while scoring two runs again.

The Owings, Maryland native started in all but one game for the Lions last season, and hit .274 with 22 runs scored, nine RBIs, and eight doubles. Gentry is the first player in Albright Baseball program history to be named to the D3baseball.com team of the week.

The Team of the Week is D3baseball.com’s weekly honor roll, in its eighth season of recognizing the top performers at each of nine positions from the previous week. To view the full team click here.

The Lions will return to action on Saturday, February 29th as they will host Wilson for a doubleheader starting at noon for their home opener.