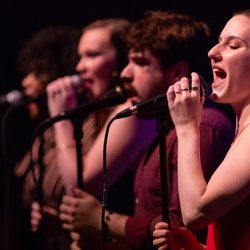 DownBeat Magazine, one of the premier and longest-running jazz and commercial music magazines in the U.S., has honored Kutztown University for the third year in a row, placing them in the Undergraduate College Outstanding Performance category of their annual Student Music Awards. In good company, KU’s Rock Ensemble I shares the honor with ensembles from University of Miami and Vanderbilt University.

The ensemble is under the direction of Dr. Kevin Kjos, director of commercial music studies, jazz minor, Rock Ensemble I and commercial composition at KU since 1998. With his guidance, ensemble studen ts wrote arrangements for the songs performed and submitted to DownBeat for consideration. Students performed popular songs based on templates, without preexisting sheet music and altered it to fit their own unique sound, simulating what producers do in recording sessions.

“Being part of the KU Rock Ensemble I has brought me wonderful opportunities,” said student Bryan Rojas, one of the band’s guitarists. “It has led me, as well as many other students, to have summer performance contracts throughout my entire time in the ensemble. I wouldn’t have had half of the experiences of performing live during my years in college otherwise.”

The DownBeat Student Music Awards, founded in 1976, are considered the most prestigious awards in jazz education, often described as a “student-Grammy.” Blind panels composed of award-winning professional musicians and educators select honorees from schools across the nation.

Rock Ensemble I consists of Brianna Parry, Emeli Sosa, Ari Sepulveda, Michaela Miles on vocals, Mike Mester and Noah Adams on drums, Bryan Rojas and Kevin Almanza on guitar, keyboards by Bobby Rutherford and Aidan Burke, bass and guitar by Dylan Langschwager and Michael Schefflin, Dave Schucker and Christina Baker on trumpets, Joey Dupp and Aedan Drummond on saxophone and trombone work by Eric Wolfe and Erica Baab. The submissions were student-arranged, including an acoustic version of Message in a Bottle by The Police, Work it Out by Corey Henry and Who Knows Who by Orgone.

However, KU music students are already participating in the real world field of professional, commercial music, performing nonstop individually and outside of university performances as a band every-other Tuesday evening at the Kutztown Pub.

“A famous music teacher once told me what it takes to be a great pro,” said Kjos, “1) Play the heck out of the music. 2) Be willing to do what’s asked of you, professionally. 3) Be a nice person. If you think of the other person first and you’re a nice person, the world is easier to navigate. That’s what this band does and all of our students incorporate that into their daily lives. They do get hired for more professional gigs. We’ve had people tell us, ‘we hire Kutztown students because they’re so nice.'”

Rock and commercial music programs are relatively new to universities across the U.S. Without many previous models to lean on, KU faculty turned to their professional experience for curriculum design. Faculty pass on their dedication and experience, while guiding students who take the lead in their involvement in decision-making, mirroring the professional world.

“We try to foster an atmosphere of collegiality, not competition. Everybody helps everybody else and the successes of our students aren’t so much competitive as it is motivational. We want to empower the students as much as we can and new students will join the excellence,” said Kjos.