The Understory is a series where we take a deeper dive into our 25 State of the Environment in Berks County indicators. 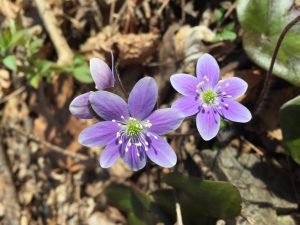 April showers bring May flowers, so the saying goes. But this popular turn of phrase establishes a somewhat inaccurate timeline. Not that flowers don’t bloom in May (they do), but rather spring’s botanical spectacle begins much earlier with the return of ephemeral wildflowers.

Ephemeral wildflowers are a fleeting beauty. As early as March, following the final snowmelt of winter, these short-lived blooms will emerge from the frosty, forest soil. It is now, while the trees stand bare, that life-giving sunlight floods the understory. In a few short weeks, the canopy will leaf out, blocking out the sun and forcing these wildflowers to die-back and resume a subterranean existence.

During this narrow window of opportunity, ephemeral wildflowers must complete their reproductive life cycle.

It is a race against time and the path is fraught with challenges: low soil temperatures restrict water uptake, soil nutrients are in short supply, and the resurgence of a hard frost is an ever-present threat. Quite the departure from humanity’s more romantic notions of spring rebirth.

Luckily, these tenacious harbingers of spring aren’t the only early risers in Pennsylvania’s forests. In the bitter soil below, certain fungi have adapted to live among the wildflower’s roots and help facilitate water and nutrient absorption. On the surface, ants aid ephemerals by dispersing their seeds. In return for their efforts, ants are nourished by the seed’s elaiosome, a fatty, nutritious appendage attached to the seed’s surface.

Food in early spring is scarce for everyone, and ants aren’t the only ones cashing in on the wildflowers’ bounty. As the first woodland ephemerals unfurl their vibrant blooms, the forest floor delights in a flourish of color, inviting pollinators to partake of their first nectar meal.

Many pollinating insects have forged exclusive relationships with specific ephemeral wildflowers. Some miner bee species, for example, feed exclusively from either the trout lily or Virginia spring beauty. Queen bumblebees seeking nourishment to establish new colonies visit the Dutchman’s breeches and use their especially elongated proboscises to feed from the deep blossoms.

Other insects still use ephemeral wildflowers as nurseries for the next generation. Lyre-leaved rock-cress and smooth rock-cress, two members of the mustard family of plants, host the eggs of the falcate orangetip butterfly. The caterpillars of many fritillary butterflies feed exclusively on violets and would cease to exist without these cheerful wildflowers.

Thus, albeit brief, the sojourn of ephemeral wildflowers in Pennsylvania’s forests is a critical thread in the great web of life. Ephemerals sustain the resurgence of insects, which in turn provide sustenance for returning migratory birds and their young. Without these ephemeral blooms, our forests would deteriorate into desolate “food deserts” – no flitting of butterfly wings, no singing of bird songs.

Despite their physiological adaptations, ephemeral wildflowers are faltering in the face of new disruptions. Unfortunately, much of this disturbance can be traced back to the actions of humans, intended or otherwise.

Human manipulation of the environment disrupts the natural rhythm of relationships responsible for maintaining the health and functionality of forests. Disruption can manifest in several ways, for example as the physical alteration of forest habitat or the introduction of an altogether new species.

The greatest threats facing ephemeral wildflowers today are the relentless browsing of white-tailed deer and competition from unfamiliar, also known as “invasive”, species; both are consequences of human disturbance.

Prolific and adaptable, white-tailed deer have learned to exploit and thrive in human landscapes where forests are fragmented by agriculture, roads, and developments. With the buffet set and in the absence of large predators, white-tailed deer populations have exploded.

Over-browsing by herds of white-tailed deer can not only reduce but also eliminate ephemeral wildflower communities.

Novel plant species introduced to naïve forest habitats will crowd-out ephemeral wildflowers but fail to support the same biodiversity of insects. These non-native species are unfamiliar to the system and, like a key inserted into the wrong lock, their presence is dysfunctional – what appears to fit will not serve the needed purpose.

This disruption threatens to stifle the spring chorus that ephemeral wildflowers usher in.

The history of Reading’s woodlands, like so many Pennsylvanian forests, is one of disruption.

During the American Industrial Revolution, the Reading Company, originally the Philadelphia and Reading Railroad Company, famously transported anthracite coal to the Nation’s most heavily industrialized areas. The Reading Company operated as a giant in the transportation industry for over a century, becoming the largest American corporation in the 1870s.

During the Reading Company’s heyday, people flocked to area to reap the spoils. In fact, Reading was home to more people in 1900 than it is today. The population boon demanded more ice for refrigeration, more materials for construction, and more fuel for energy.

The ice industry dammed Angelica Creek until the advent of electric refrigeration and quarrying flourished in the surrounding woodlands until World War II. After these industrial legacy activities ceased, non-native plants like multiflora rose, autumn olive, and honeysuckles colonized the landscape due to the intentional and recommended planting of these species by people.

On this disrupted stage, Angelica Creek Park was built.

While the ice dam was removed and quarrying faded from memory, honeysuckles dominated the understory of Angelica Creek Park for decades. Honeysuckles’ arching branches and twining vines leaf out quickly, shading the ground much earlier than would the towering forest canopy above. In doing so, honeysuckle shrubs deprive ephemeral wildflowers of this fleeting but critical sunlight.

Over the past few years, Berks Nature’s stewardship team has systematically removed much of the disruptive honeysuckle from Angelica Creek Park’s woodlands, allowing spring sunlight to warm the forest floor once more.

This was the moment the wildflowers had been waiting for. Just below the surface, a patient seedbank of ephemeral wildflowers had laid dormant, rising now from their slumber to usher in the spring once again. In the year following the honeysuckle removal, round-lobed hepatica, spring beauty, and even the rare blue cohosh were all reborn on the wooded slopes of Angelica Creek Park.

Resiliency in the Face of Crisis

Even with the honeysuckles removed, woodland restoration efforts continue as the Berks Nature stewardship team turns their attention to another novel threat: garlic mustard.

In March and April, as COVID-19 took hold in Berks County, Sarah Chudnovsky, Berks Nature’s Land Protection Specialist, spent her days social distancing in the woods of Angelica Creek Park. Her mission was simple: remove as much garlic mustard as possible.

The more disrupter species we can remove, the more native species we can promote, and the more resilient and diverse of a seed bank we can help our forests build. For the ephemerals of Angelica Creek Park, the capacity for resiliency had been there all along, in its seed bank, waiting for the right opportunity.

Honeysuckle and garlic mustard removal are creating that opportunity.

Returning to the park day after day, week after week, Sarah watched each ephemeral flower take its turn in the sun. First the white petals of the bloodroot, followed by tightly furled mayapple shoots and the brilliant purple indigo of the round-lobed hepatica.

These moments in the woods of Angelica Creek Park provided a grounding respite for Sarah during the tumultuous times of COVID-19.

Where social distancing had shrunk Sarah’s world, the woodland ephemerals expanded her perspective. Here, in just one small patch of urban forest, an extraordinary range of activity pressed on. The resiliency of nature was in full bloom.

The perseverance of these ephemeral wildflowers resonated with Sarah, providing her with a renewed sense of reverence and appreciation. She relished those solitary moments in the woods, dispatching fistfuls of garlic mustard to clear new space for her ephemeral family.

What else is waiting in the soil of our disrupted woodlands for its chance at life?

Special thanks to Dr. Will Ryan, Research Botanist and Restoration Ecologist at the Academy of Natural Sciences, for sharing his expertise, which greatly contributed to the creation this piece. 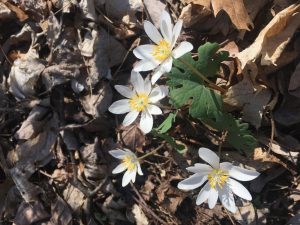 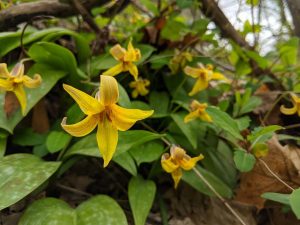 What is State of the Environment?