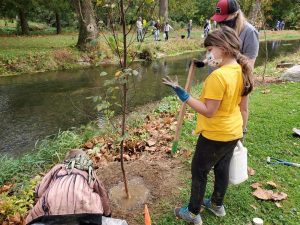 Yes it’s true. Even as these alluring fish dart and glide beneath the water’s surface, they rely on their terrestrial, streamside neighbors – the trees – to keep their watery home cool and habitable. Without shade, trout streams can get hot, placing inordinate, even fatal, stress on the resident fish.

Streamside trees do more than cast shade. Trees collect carbon dioxide, removing these greenhouse gases from the atmosphere and mitigating climate change. Their roots also filter stormwater and hold the stream bank in place, resisting erosion and preventing excessive quantities of soil from entering the water.

Trees are a river’s guardians.

Imagine then the grief of the Marion Township Rod & Gun Club upon discovering 34 dead and dying ash trees in their streamside forest.

A 1.5-mile stretch of the Tulpehocken Creek flows through the Club’s property and is stocked with trout each year, much to the membership’s delight. But the concurrent loss of so many ash trees in an already meager forest threatened the long-term health and fishable future of the creek.

The Marion Township Rod & Gun Club’s loss, while lamentable, reflects an even more grim, national trend. Across the upper Midwest and northeastern regions of the U.S., ash forests are under attack, and the culprit is no bigger than a dime.

Without these safeguards, emerald ash borer beetles are booming in the U.S. and at a high cost.

How can one tiny beetle provoke such a devastating fallout? The beetle’s larvae are lethal.

Adult ash borer beetles lay their eggs on ash trees, or any member of the Fraxinus genus, and, upon hatching, the larvae bury themselves into the tree, through its bark, to feast upon its phloem.

Phloem is a network of living tissue within the inner bark that ferries sap, rich in sugar and nutrients, throughout the tree, supplying energy and food where it is needed. Like our bloodstream and its web of veins and arteries, phloem supplies life-sustaining fluids to all living parts of the tree through a system of channels running from its subterranean roots all the way up to its sky-reaching leaves.

As emerald ash borer larvae feed on the phloem of ash trees, their sap veins are severed, inflicting mortifying harm.

The 34 ash trees that perished at Marion Rod & Gun Club are the latest casualties in this bleak forecast; victims of the emerald ash borer.

Even without the ash trees, the Tulpehocken Creek needed a streamside forest, but the Marion Rod & Gun Club would need help imparting new life into the mourning banks of the Tulpehocken.

Fortunately, a robustcommunity of land and water stewards swelled around the Marion Township Rod & Gun Club. The Berks County Conservation District awarded $4,735 to purchase trees while Berks Nature designed a tree planting plan that would not only replace the lost ash, but also bolster the existing streamside forest currently laying sparse claim to the Tulpehocken Creek’s floodplain.

Club members were joined by volunteers from the Tulpehocken Creek Watershed Association and Berks Nature staff on October 10, 2020 to plant 111 native trees.

“Mother Nature is the one who tells us what to do,” explained Larry Lloyd, Senior Ecologist at Berks Nature, while gesturing at the mature sycamore trees and silky dogwood shrubs already flourishing along the Tulpehocken’s banks.

These were the trees that inspired Berks Nature’s planting strategy, each native species carefully picked to reflect Mother Nature’s plans. Sycamore and silky dogwood were joined by black willow, swamp white oak, river birch, and red maple: a diverse assemblage of trees perfectly adapted to take root along the creek.

Together, this varied assemblage of native trees will minimize the harm inflicted by the emerald ash borer beetle. As these young trees grow and mature, their canopies will fill gaps left by the fallen ash, shading the sensitive communities below. Under the shade, sun-greedy disrupters like exotic honeysuckle vines fare poorly, granting advantage to native, shade-loving plants, while trout and other aquatic animals will rejoice in the refreshingly cool flow of the Tulpehocken Creek.

As the emerald ash borer infestation spreads, ash forests across the United States are likely to fall. Local action, like those taken by the Marion Township Rod & Gun Club, Berks Nature, and the Tulpehocken Creek community, can preserve the stability of our forest ecosystems by replacing lost ash trees.

We all need trees.