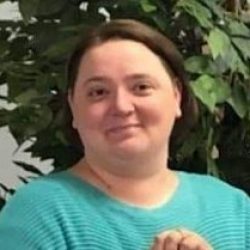 West Reading, – Breast Cancer Support Services of Berks County is pleased to announce that staff member Vanessa Shurley has been promoted from Administrative Assistant to Social Media & Marketing Coordinator. The Board of Directors, staff and volunteers congratulate Vanessa on her promotion. Vanessa Shurley is a Berks County Native and graduate of Governor Mifflin High School. She was diagnosed with Stage 4 Metastatic BC de novo in March of 2016. Vanessa began coming to BCSS as a participant in our Newly Diagnosed program and then began to attend other BCSS peer-to-peer support groups. In 2017 she started volunteering as a peer support facilitator and assisting with special events.

She officially joined the team in May of 2019 as a part-time Administrative Assistant and became a full time staf member in February of this year. Her accomplishments include being named a YSC Face2Face Coordinator and PA State Leader, the 2018 recipient of the YCS Game Changer Awad and she serves as a METAvivor Ambassador. In her new role Vanessa will be responsible for all social media, the BCSS website, program and marketing materials as well as assisting with special events and fundraisers.

Vanessa lives in Lebanon with her fiance Jason. She is the proud mother of three children, two at home and one in college. In her free time you can find her expressing her creativity through crafting.

The Board of Directors and staff of BCSS congratulate Vanessa on her promotion and look forward to working on future social media and marketing projects with her.