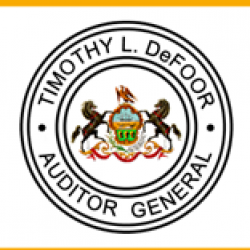 Auditor General Timothy DeFoor announced that his newly-launched performance audit of the Pennsylvania Commission on Crime and Delinquency (PCCD) will include a focus on the First Chance Trust Fund, which benefits the children of incarcerated parents.

“The First Chance Trust Fund is a crucial element of Pennsylvania’s efforts to help at-risk kids stay on the right path,” DeFoor said. “My audit will help ensure that the trust fund is operating as intended and delivering on its promise to help children of incarcerated parents chart a course to a bright future.”

Nearly two-thirds of state prison inmates have at least one child, according to the Pennsylvania Department of Corrections. Intervention efforts and programs supported by the First Chance Trust Fund can help those children avoid becoming involved in the justice system.

The First Chance Trust Fund is supported by private, tax-deductible donations and a surcharge on certain vendors that have a contract with the Department of Corrections. DeFoor noted that his department is required to audit the trust fund every three years under the authorizing legislation, Act 44 of 2017, which received bipartisan support in the General Assembly.

“Ensuring there is appropriate funding to train law enforcement is essential to keeping our communities and residents safe,” DeFoor added.