by Ellixson's Tae Kwon Do Academy 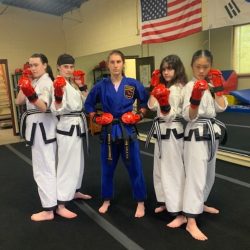 On Saturday, May 15, six students from Ellixson’s Tae Kwon Do Academy Boyertown, take the stage to test and earn their Black Belt Ranks. The testing is a full 8-hour day, assessing strength, endurance and skills. Earning a Black Belt marks a level of achievement by the martial artist. It is a reflection of the years of training and physical conditioning, but also emotional fitness, as defined in the 5 Tenets of Tae Kwon Do: Courtesy; Integrity; Perseverance; Self Control; and Indomitable Spirit.

“I cannot say enough how proud I am for the students that are testing,” said Donnie Ellixson Jr., owner and founder of Ellixson’s Tae Kwon Do Academy Boyertown. He went on further to say: “Our Academy prides ourselves on our Black Belt Exam being challenging on a good year, but to come through the adversity and challenges that these students encountered in the past year and still train at the high level that is needed for this test is truly inspiring. I’m not only excited for these young warriors that we have testing here, but equally as excited for the role models that these students are for the next generation.  I have witnessed first-hand what this pandemic has done to kids and teens especially.  To have five strong female teens finding their way and overcoming their circumstances to still push through and reach their goals of Black Belt puts them in a position of great influence for their classmates.” 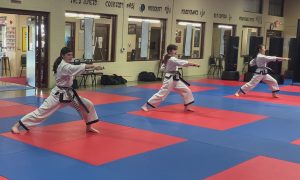 Ms. Nicole Shimukonas, also 14 years of age, will be testing and earning her Second Degree Black Belt.  Shimukonas is also an Assistant Instructor at the Academy and a member of Ellixson’s Elite National Competition Team.

Mr. Ellixson states, “Ms. Shimukonas…. Yeah we call her ‘The Machine’.  She trains 6 days a week Tae Kwon Do, while also teaching 6 days a week. At 14 years old she maintains the tough love teaching approach that she was brought up under.”

In the year leading up to this test, Ms. Shimukonas, along with the other four young ladies, had to execute and document 20 Random Acts of Kindness and complete 25 hours in Ellixson’s Pay It Forward Project, which does community service in and around the Boyertown Community. 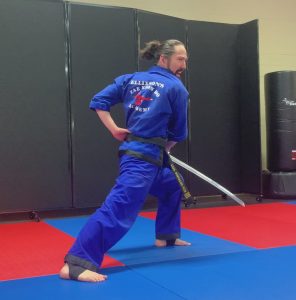 The final candidate is Mr. Axel Gonzalez-Kim, Jr. The Academy’s Head Instructor, Mr. Gonzalez will be testing and earning his Fourth Degree Black Belt, which symbolizes Master.  “Our Mr. Gonzalez is something special”, Ellixson comments, as he reflects back on the 22 years Gonzalez has been training under him.  Ellixson goes on to say, “He also has ramped up his training in the last year, training almost every day sometimes multiple times a day, plus full-time teaching at The Academy.  Those that get to come see the Black Belt Exam in person (sold out) or watch via our Facebook Live Event are in for a real entertaining two hours of a martial arts! Some of the highlights of Gonzalez’s test include a 3 man fight skit, musical forms, a blindfolded form, double sword form and an amazing array of board and concrete breaks.  You won’t want to miss it!!”  As Head Instructor, Mr. Gonzalez runs classes at every level, including Team Elite and the Instructor Training Program (I.T.P.) which is where he gets to work with the next generation of mentors.  After this Test, Mr. Gonzalez says, “I plan on getting back to what I love doing and that’s teaching and making a difference in our community”.

This test can be seen on Ellixson’s Tae Kwon Do Academy Facebook Live Event @ellixsonstkd Saturday May 15, 2021, 6-8pm.

Questions or media requests for attendance may be directed to: Donnie Ellixson Jr., 215-512-7488.