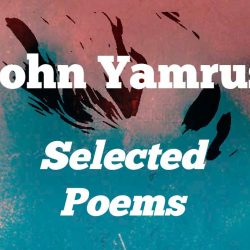 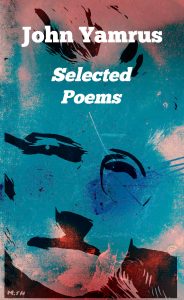 Capping a career that is still going strong after more than 5 decades, with no end in sight, Concrete Mist Press is pleased to announce the release of SELECTED POEMS, the first ever fully realized retrospective of the poetry of John Yamrus. The collection covers all aspects and periods of his work, from his popular  noir-ish narrative poems, to the hugely influential, groundbreaking minimalism of recent years. With a perceptive and insightful introduction by editor Mish Murphy, this is the John Yamrus book serious lovers of modern poetry need to have.

The collection was brought out by his publisher to mark the author’s 70th birthday, and it’s a look back at more than 200 poems – topping out at nearly 400 pages in length –  pulled from Yamrus’ 50 years as a “working” writer.

John Yamrus resides in Sinking Spring and has published 28 volumes of poetry, 2 novels, 3 volumes of non-fiction and a children’s book. He has also had more than 2,500 poems published in magazines and anthologies around the world. Selections of his work have been translated into several languages, including Spanish, Swedish, French, Japanese, Italian, Romanian, Albanian, Estonian and Bengali. His poetry is taught in numerous colleges and universities.

The author has been a guest on BCTV several times, you can view interviews with John Yamrus here.