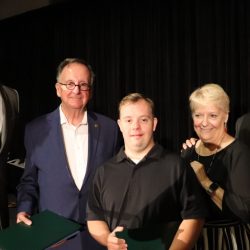 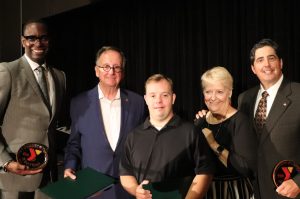 On Friday, September 17, The YMCA of Reading and Berks County hosted their annual fundraising breakfast, Breakfast of Champions for Youth, at the DoubleTree by Hilton. Over 200 staff members and community supporters were in attendance to honor Dick Ehst as the 2021 YMCA Champion for Youth.

Dick began his banking career in 1968 following his service in the United States Marine Corps during the Vietnam War. He attended Albright College, and previously served as a member of Albright’s Board of Trustees where he also chaired its Enrollment Management Committee. He is a graduate of the Commercial Bank Management Program at Columbia University Graduate School of Business.

Dick, along with wife Angela, demonstrate their commitment to community by giving  to organizations and causes that positively impact the lives of others. Ehst believes in the importance of giving a “hand up”, not just a “hand out” to effect sustainable, long-term success for future generations.

The Y also honored Ben Schucker, of Fleetwood, as the 2021 Youth Honoree. Schucker has been employed at the Tri Valley YMCA for more than two years performing general maintenance and was recommended for the position by the Office of Vocational Rehabilitation (OVR). Schucker has been known to go above and beyond his work duties and is loved by members, children, and parents of children enrolled in YMCA Early Learning Center.

“Ben will do any task you ask of him, but the most important thing he does is greet everybody with a smile,” said Brandon Shurr, Branch Executive at Tri Valley YMCA.

The event raised more than $200,000 to benefit social service programs, childcare programs, transitional and recovery housing, and other community initiatives provided by the Y within Berks and Lancaster counties. “At Customers Bank, we build our culture around two things: the first thing is that everybody you come into contact with needs to know that somebody cares about them. The second is that everybody needs something to look forward to,” said Ehst, “the Y cares, and they provide opportunities for folks to have something to look forward to.”