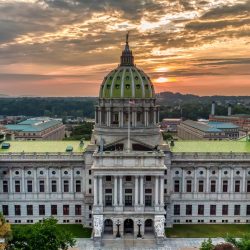 Members of Pennsylvania’s Legislative Reapportionment Commission have said they anticipate releasing proposed state House and Senate maps for voting districts by the end of the month. One group has created maps it hopes the LRC will consider in the redistricting process.

Michael Skros, who worked on the People’s Maps, says the group listened to communities of interest in a mapmaking process that he thinks could be a model for the General Assembly.

“I think it also reflects the goal of a Legislature and how legislation should be made in general – by taking everyone’s concerns into account, hearing expert testimony, and working to compromise on a solution,” he said. “And I think the process taken by Fair Districts over the past several months truly reflects that.”

The draft maps began with winning maps from a mapmaking competition, then incorporated ideas and feedback from more than 1,000 Pennsylvanians from across the state. Fair Districts PA submitted the maps to the LRC last week and is seeking public comment on the alternative maps through Sunday.

Jim Hertzler, a now-retired Cumberland County commissioner, became involved with Fair Districts PA a decade ago. He said he was frustrated in the last redistricting process that, with little notice, 12 municipalities in the western part of the county were moved into completely different districts. Hertzler said he hopes the LRC reviews these maps as it redraws state House and Senate lines.

“The gerrymandering of the districts has led to enclaves of partisans that essentially serve the party as opposed to the state,” he said. “If we have a fair process, we have a better chance of actually getting the work of the people done.”

The LRC certified the U.S. census data sets as usable on Oct. 25. From that date, the commission has 90 days to produce preliminary state House and Senate district maps.