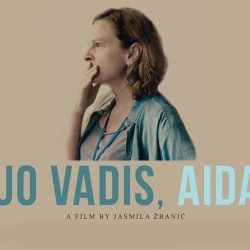 As part of the “Global Oscars Comes to Berks,” Penn State Berks will present the film Quo Vadis, Aida? at 6:15 p.m. on Tuesday, Nov. 16, in room 5 of the Luerssen Building. The presentation is free and open to the public.

Set in Bosnia in 1995, Quo Vadis, Aida? is the story of Aida, a translator for the United Nations in the small town of Srebrenica in Bosnia. When the Serbian army takes over the town, her family is among the thousands of citizens looking for shelter in the UN camp. As an insider to the negotiations, Aida has access to crucial information that she needs to interpret. What is on the horizon for her family and people – rescue or death?

Quo Vadis, Aida? is a 2020 Bosnian war film written, produced and directed by Jasmila Žbanić. An international co-production of twelve production companies, the film was shown in the main competition section of the 77th Venice International Film Festival. It was nominated for Best International Feature Film at the 93rd Academy Awards.

The next film in this semester’s Global Oscars series will be Another Round? on Dec. 7. The Global Oscars Series is presented by the Penn State Berks global studies baccalaureate degree program and the division of humanities, arts and social sciences. For more information, contact Kirk Shaffer, professor of Latin American studies, at 610-396-6258, or via email at [email protected].

About the Penn State Berks Global Studies degree program
The bachelor of arts in global studies program offered by Penn State Berks is designed for students who are interested in a liberal arts degree with a concentration in global studies. Students engage in active and collaborative classroom experiences in addition to intensive study abroad and internships. Graduates are well prepared for employment in a wide range of government agencies, nonprofit organizations, industries and businesses.