Pennsylvania’s child care and staffing crisis, by the numbers

A roughly $2 trillion social spending plan could transform the industry, but right now providers are struggling to attract and retain workers. 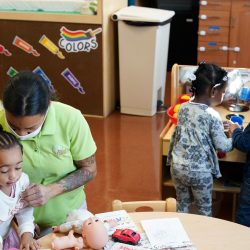 HARRISBURG — As a roughly $2 trillion social spending plan moves through Congress, transformational change could be on the horizon for child care in Pennsylvania and across the country. But now, an industry pivotal to the state’s economic recovery is facing severe staffing shortages.

Providers are struggling to attract and retain workers because of low wages, Spotlight PA recently reported, and the situation has ripple effects for the state’s economy, as parents shuffle their work schedules to deal with shorter hours and face tough decisions about how to care for their children without losing a paycheck.

Here are the figures that stand out, and what they show:

What it means: Advocates for child care providers say many more providers would have closed if not for hundreds of millions of dollars in federal relief. Still, the recovery is uneven. Some parts of the state lost more providers than others, and some types of programs — small ones, based in private homes — saw a larger net loss than larger child care centers.

What it means: Child care providers say they can’t hire enough employees to meet the current demand, and they’ve had to close classrooms, reduce hours, and serve fewer children.

A survey released in September of more than 1,100 child care providers in Pennsylvania found there were nearly 26,000 children on waiting lists. More than 34,000 additional children could be served if providers were fully staffed. 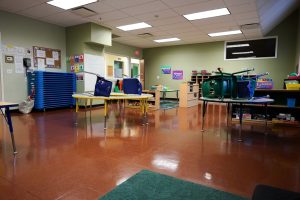 A classroom not in use at The Willow School, which is serving about half as many kids as it used to because of a staffing shortage. THOMAS HENGGE / Philadelphia Inquirer

What it means: Child care providers operate on thin margins, which makes it difficult for them to raise wages and ease staffing shortages. At the same time, costs for parents are high. And even though low-income families are eligible for government subsidies, that assistance doesn’t cover the cost of care, child care advocates say. That perpetuates a broken business model.

What it means: Previous federal assistance helped programs stay in business as they dealt with shutdown orders, drops in enrollment, and new cleaning and safety requirements. Child care advocates expect providers will use some of the latest relief money to offer higher pay or better benefits for workers. But recruiting challenges could remain, and providers fear the money is only a temporary fix.