Report: PA Could Learn from Germany about Career, Tech Education 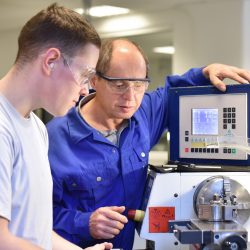 A new report found Germany’s investment in career and technical education could be a model for the Keystone State.

From a lack of sustained state investment in education to local agency decision-making, some districts have to limit the number of students who can attend a technical school, according to Pennsylvania Partnerships for Children.

Kari King, president and CEO of the group, said although a European model might be difficult to replicate, Pennsylvania can learn from Germany’s early commitment to career exploration, which starts as young as age 10.

“We hear that there’s a lot of resources there for students, for their kind of career awareness once they’re in that program,” King explained. “But there’s not so much of that open line of communication before the student gets to the career and technical education center, that they’re aware that’s an option.”

There are more than 80 career and technical education (CTE) centers across the state.

King added improving access to CTE will be a challenge without increased funding from the state. Gov. Tom Wolf’s final budget proposal includes $1.7 billion for education, including a little over $6 million for CTE.

She argued it is a start, but not a long-term solution for students in search of post-secondary plans.

“There’s even a lot of options once you’ve chosen this path, that it’s not locking you in to, you’re 17 or 18, graduating high school and going directly into the workforce,” King noted. “There’s a multitude of options that a student can look through and determine what’s going to make the most sense for them.”

The report also suggests Pennsylvania can learn from Germany’s partnership with local business communities. The German government enters into collaborative agreements with businesses to discuss workforce needs, which then inform curriculum development and apprenticeship programs.