Eight More Added To United Roster Ahead Of Season Opener 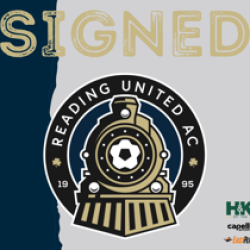 Becher saw time in 16 games for Hartford this past season, starting ten for the Hawks. The midfielder accounted for an assist in a 2-1 victory over Binghamton to help the Hawks march towards the playoffs. The Florida-native should factor into the midfield equation for Reading this summer.

A four year starter at Findlay, Bolinger adds another piece to the midfield puzzle for Reading this summer. The Ohio-native has started his last 63 games for the Division II Oilers, scoring four goals with three assists.

Adding a veteran presence to the midfield, Correia attended UFR STAPS Orleans before transferring as a graduate student to West Alabama. Correia started in all 16 matches during the 2019 season, leading the team in goals (4), points (9), and game winning goals (2).

Holden saw time in ten matches for Seton Hill, starting three of them. Despite playing more of a super-sub role this season, Holden played in 407 minutes for the Griffins during his junior campaign.

Ramirez returns to Reading for another summer, after briefly starting with the team in 2021. The Central Florida midfielder is a spark off the bench for the Knights, seeing time in three games this past season. A graduate of Lower Dauphin, Ramirez will add a bit of local flavor to the squad from the state capitol.

Solowey captained Rutgers-Camden to a solid season as a senior, starting 15 of his 19 appearances. The Franklinville, NJ-native scored a goal against Gwynedd Mercy to spark a 7-0 victory, one of 21 shots he took last year. In Camden, Solowey has played in 39 games, starting 23 in the midfield.

Von Giebel stars for William Paterson, earning a spot on the 2021 New Jersey Athletic Conference Men’s Soccer All-Second Team this past year. The senior forward contributed 12 goals and three assists while starting all 18 matches. He scored four game winners for the Pioneers, two seasons after transferring from Saint Michael’s College.

Weatherspoon is another returnee for Reading, after seeing time in nine games for United last season. A YSC Academy graduate, Weatherspoon scored a goal in 16 starts for Elon this past season. The West Norriton, Pa.-native should factor into the forward mix for Reading this summer.

Reading United opens its 2022 season on the road this Saturday, May 14th against Lehigh Valley United at Moravian College. United will play its first home game a week later, facing Philadelphia Lone Star on May 21st beginning at 7:00 p.m. at Alvernia University. Season and game day tickets are available for purchase at readingunitedac.com.