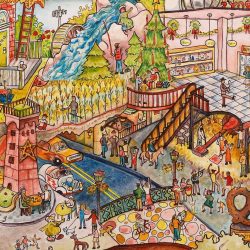 The title selected for Reading Theater Project’s fall production, a collection of three one-act plays, is at once familiar and intriguing: “Present, Future, Past.” Two of the plays to be showcased were produced by the then-fledgling company in 2005. The third is a more recent work, written in 2018 and first presented as a staged reading for RTP in 2019.

So why this title?

“The expression is ‘past, present, future,’ and it’s used so much it has become cliché,” said Vicki Haller Graff, RTP’s artistic director. “We arranged the plays in the order we thought would take the audience on an emotional and intellectual journey and titled the production following that order.

“Like all our work, we wanted to play with the expectations of the audience and encourage them to lean in from the beginning. ‘Present, Future, Past’ is familiar but still new.”

Scheduled to run for two weekends, Nov. 4 to 6 and 11 to 13, in the George Baer Chapel, 39 S. Sixth St., Reading, the featured works are “Buy to Rent” by Felix Alfonso Peña, “Everybody Hates This Place” by Adam Richter and “Grave Concerns” by Susan E. Sneeringer. All three playwrights either reside or have resided in Berks County.

Moreover, all three plays are set in Reading, Pa., or someplace suggesting Reading, and explore issues related to its people, the city and its environs.

Exeter Township resident Peña, who holds a bachelor’s degree in anthropology and a master’s degree in folklore and anthropology from the University of Texas in Austin, was inspired to write “Buy to Rent” while living on North 11th Street in Reading. It’s rather effortless to see what’s happening in the inner city when you’re sitting in the middle of it.

And at the time, he was working in the social-service world and observed people caught in a bind as they watched the value of their homes diminish. That’s the theme of his play, which fits perfectly into RTP’s mission: to capture the issues affecting the community – in this case, Reading.

“The choices people have to make, or are forced to make, interest me,” he said.

Thus Nando (portrayed by David Donado), a Latino man who buys houses with long-established owners and then turns them into rental properties, is, Peña believes, “making the best of a situation. He’s not all bad. This is simply how you can make money now. So, when he approaches Milly about purchasing her home, she is faced with a tough choice: to abandon ship and hurt her shipmates (i.e., her neighbors), or save her own skin.”

Directing this second local incarnation of “Buy to Rent” is Reading native Daphnee McMaster, who earned a bachelor’s degree in English and creative writing at Lehigh University. McMaster said she acted since she was 15, and through that experience gradually was drawn to directing.

For her, “Buy to Rent” is about “accepting and navigating change.” And her approach is not so much driven by plot as it is by character. However, the story, written in 2005 during one of several waves of white flight from the city, is still relevant, McMaster argued.

“I lived through that,” she said. “But today the same conversation is happening among people of color, looking to get out. I adjusted some things to modernize the play here and there. In the end, my approach is to let the actors find their own truth. Jane Ney, who plays Milly, was cast because she made it so personal in her audition. This is not just a story. It is someone’s story.”

And therein lies Peña’s excitement with the choice of McMaster to helm this production of his show, and of RTP to produce it once again.

“I love the vision that Joel Gori set when he founded RTP,” the playwright said. “It’s wonderful to ground theater in the community. At some point, all good theater must represent the community. And that’s what Daphnee and certainly RTP are doing. It’s what sets this company apart.”

Wyomissing playwright Adam Richter is also thrilled to see his play, “Everybody Hates This Place,” to be part of an evening of theater focusing on Reading, even though the name of the town at the heart of his piece is Riverton.

“I didn’t want audiences to be distracted by that,” said Richter, who holds a degree in philosophy and political science from the University of Pittsburgh. “I was concerned about geographic anomalies. So, think of Riverton as any post-industrial, midsize American city.”

Indeed, it would be difficult to dispute that Reading fits his description.

Richter’s family moved to Berks County when he was 7 years old. He graduated from Reading High School and dabbled in theater since he finished college.

“I wanted to do theater in high school, but I couldn’t sing or dance,” he confided. “But in college, I was involved with improv nights.” And in the summers, he worked with Genesius Theatre, although mostly backstage. It was when he moved to Seattle, Wash., in the mid-1990s, that his theater experience began to percolate when he wrote and performed with a sketch-comedy troupe.

“My sketches were OK,” he said. “My performance was terrible.”

So, when RTP asked for a sketch for its annual Fringe Festival, Richter wrote one, and it was well-received.

“People asked, ‘What are you doing next?’ he said. “And that lit a fire under me. I’ve been writing plays ever since.”

A staged reading of “Everybody Hates This Place” was presented by RTP in 2019. The Barley Sheaf Players in Lionville, Chester County, produced it in early 2020. It was there that Richter overheard someone say, “This could be Pottstown.” Hence, fictional Riverton became a real place for people in similar cities. And in “Present, Future, Past,” it’s Reading.

Tasked with directing Richter’s play is Andrea Kennedy Hart, who grew up in Norristown, Montgomery County, and then lived for a time in Pottstown before moving to Berks County in 2017. She now resides in Douglassville.

Richter said he fleshed out the play since its last production, and he’s thrilled with the cast that Hart has assembled: Amy J. Young, Jeanette Fotis, Aaron Rineer and Jordan Eck. Both Hart and Richter feel blessed to have the opportunity to work with Young in the leading role of W.C.

“Playwrights have a responsibility to ensure that casts are as diverse as possible,” Richter said. “There is a problem with diversity in casting. I want to offer as many opportunities to actors of color as I can. Amy Young, who is a Black woman, brings so much to the role of W.C. She adds a lot of depth and background that just wasn’t there before. She’s amazing.”

For Hart, the play is about “the relationship we all have with our home and our community, and whether or not we owe anything to our home and community,” she said. “Riverton evokes the feeling of Reading, to towns once reliant on industry. At its core, this play is about the juxtaposition of the old and the new. Past, present and future collapse in on themselves.

“I want audiences to consider in what ways their community defines them.”

The plot, about a famous author returning to her hometown and the impact that visit may or may not have on the community’s future, is a tantalizing one for local theatergoers, given the role Reading played in Lynn Nottage’s creation of the Pulitzer Prize-winning play “Sweat.”

As Hart puts it: “We are defined by where we live.”

“I don’t remember writing this play,” said playwright, screenwriter, actress and director Susan E. Sneeringer. She is talking about “Grave Concerns,” the third and final piece of RTP’s evening of original theatrical works.

“When I was asked to write a short one-act play, the first thing I thought of, for some reason, was the gazebo at Charles Evans Cemetery,” said Sneeringer, a native of McSherrystown, Adams County, who moved to Ephrata with her family and then arrived in Exeter Township in 1970. One of 10 children, she graduated from the former Central Catholic High School, later earning a B.A. in theater arts from Pennsylvania State University. She also is an alumna of the American Film Institute in Los Angeles, where she was a screenwriting fellow in the late 1980s.

As for Charles Evans Cemetery, where “Grave Concerns” is set, it is the place where she and her good friend, the late Reading actor Grant Gordon, used to go to run lines for plays they were rehearsing.

“I have very fond memories of the gazebo at Charles Evans,” she said, “so that became the setting for the play. Actually, the play wrote itself. That’s the best kind of writing, because it was automatic. The characters began telling me who they were. I had an ethereal connection with them. The play just sort of came to be.”

When asked what the play was exploring, Sneeringer, who resides in Orefield, Lehigh County, didn’t hesitate to respond.

“It’s about somebody ignoring the joys of everyday life,” she said. “And a group of departed souls watches this woman’s emotional conflict, combining their energies to free her in order for her to see what’s beyond. By enlightening her, they help push forward their own journeys to the other side.”

Directing “Grave Concerns” is Jody Reppert, a native of Birdsboro who now resides in Wernersville. Reppert taught theater and English at Wilson High School for 21 years after graduating from Millersville University, where he discovered theater.

He directed at Genesius Theatre, where he met his wife, teacher and actress Karyn Reppert. The couple moved to Arizona for a time, but they returned to Berks County in 1999 after starting a family. Today, Reppert is still teaching at Wilson, only these days his subjects are Film as Literature and senior English. In addition, he directs productions at the Yocum Institute for Arts Education.

Even though the play is set in the past, Reppert felt he needed to update some of its cultural references. Other than that, nothing has changed.

The play’s central character is Eve, brought to life by Amy J. Young. A professional photographer whose mother is dying and whose relationship is tanking, Eve puts her ambitions above the personal. As Sneeringer described it, “Eve is on pause. I believe you could say the play is about following your journey. Seeing where life takes you and not being afraid of where you land.”

Reppert says it this way: “It’s about taking notice of the balance between work and family and the people you love. It’s about giving priority to the things that really are important in life.”

To bring that message home, Reppert has conceived of a production that places the cast among the audience.

“In theatrical terms, it’s almost as if we’re in the round,” he said. “It’s a kind of a thrust. It’s quite dynamic. The geometry of the blocking endows it with a palpable sense of reality, I think. As such, it works from different angles, and what’s so rewarding is that the cast finds it fulfilling.”

Aside from Young, also appearing in the “Grave Concerns” company are Karyn Reppert, Rob Weidman, Maeve Weidman and Jordan Eck.

Tickets for “Present, Future, Past” are available online at readingtheaterproject.org or by calling 484-706-9719. This season, all productions follow the Pay What You Will model. Theatergoers can choose their own price, including $0. RTP recommends $20 for this mounting. The company encourages those who can afford it to pay $40 to support the Inclusion Action project’s Pay It Forward program that makes theater more accessible to all audiences.

George Hatza is the former Entertainment Editor of the Reading Eagle. He is retired and living in Exeter Township.