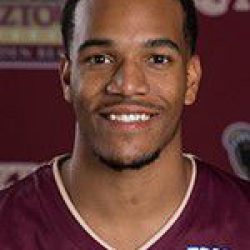 KUTZTOWN, Pa. – During the spring semester, Kutztown University will feature a variety of student-athletes in order to get an inside look on their everyday lives. Articles will not only focus on their athletic performance, but what they do outside of competition. This week’s feature is senior Demetrius Bennett  from the men’s basketball team.

Bennett works hard both on and off the court. As a member of the men’s basketball team here at Kutztown University, Bennett strives to be the best role model and team captain he can be. Being a four-year member of a collegiate team has prepared him to be a leader in the future.

What has been the most memorable part of your career so far?

“Probably last year when we had our 18-game winning streak because we tied the school’s record for the longest winning streak.  Also making the PSAC’s and winning the PSAC East last year with the guys that I’ve been with for a while made the experience super memorable. We were also able to leave our seniors off on a good note.”

As a senior, what goals did you have coming into the season knowing it was your last year?

Bennett prides himself on leading the team by example. He looks to be a role model both on and off the court. “I know I don’t get a lot of minutes and I’m not a star player but I can help people with the little things. I feel like if you take care of the small things, the big things will take care of themselves. It’s not just about basketball, you’re a student first and then you’re an athlete.”

When and why did you start playing basketball?

“I started playing basketball back in seventh grade, and to be honest, it was almost by accident. I was the tallest kid in my school and one day the coach came up to me and asked if I played. I played various sports with my friends outside of school at the park, but I had never played organized basketball until then.”

Outside of basketball, what do you like to do in your free time?

Outside of basketball, Bennett enjoys reading motivational books about leadership and how to make the transition from a college student to an adult. His favorite movie is Pursuit of Happiness because he likes the plot and Will Smith is one of his favorite actors. In his free time he also does calisthenics to keep his muscle tone.

What is your major and what does your dream job look like?

Bennett’s major is Business Marketing. “My dream job would be anything in sales. I’m a really personable person so I feel like I get along with a lot of people. I feel like if I can make sales on top of that, it would make it even better.”

He states that he would possibly like to move back to Philadelphia because he misses his family. At the same time, he wouldn’t mind staying in a city close to Kutztown once he graduates, since he has been living here on his own for the past three years.

Can you think of one experience this season that has encouraged team bonding?

“There’s been a lot of experiences, but a major one was the Eagles because they were on a crazy winning streak. We all got together and watched the Super Bowl.”

The team is also really excited to watch the March Madness games and to see who will win the tournament.

What goals did the team have coming into the season? What have you guys done to try to accomplish them?

“I think our goal every year is to win the PSAC East first, and then win the PSAC Championship. We were only a game away from winning the PSAC last year. After we accomplish those two goals, our goal is to go for a run at winning the NCAA Tournament.”

“We always try to one-up the season we just had. I know it has been hard the past two years because we won the PSAC East two years in a row, and even harder last year because we went on a crazy winning streak, but we’re always just trying to improve and get better no matter the circumstances.”

“I think coming into preseason a lot of guys were super ready, even the freshman were on board. They have known our success in the past and it has motivated them to come into our season in shape and ready to learn a lot and be a part of our success.”

If you could play for one professional team who would you play for & why?

“I think I would want to play for the Sixers. The past few years they haven’t been doing so well, but now that they’ve got Embiid and Simmons, I feel like they’re on the rise. Since I’m from Philly, I feel like they’re bringing Philadelphia sports back to where they need to be.

Is there a certain song that gets you/your team pumped up for games?

“Definitely Meek Mill – Dreams and Nightmares (the intro) because I feel like that’s been a really big song that everyone has been listening to. And the Eagles came out to it as well.”

What’s the funniest/best thing that’s happened since you’ve been on the team?

“In a scrimmage one time coach called me in, and when I went to rip off my warm-up, my whole jersey came off so I ran out in my undershirt. I was just too hype to get in.”