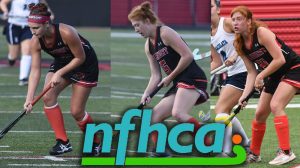 The trio were part of 268 Division III field hockey student-athletes that earned the award after maintaining a cumulative GPA greater than 3.90 through the end of the first semester of the 2018-19 academic year.

Lehman, a Business Administration major, earned the Collegiate Scholar of Distinction honor for the second-straight year. On the field she set new career-highs with 15 points behind four goals and seven assists, while earning All-MAC Commonwealth Honorable Mention. Jennifer Crumling, a biology major, earned All-MAC Commonwealth second team honors after posting 15 points on the season behind a career-high six goals and three points. Nicole Crumling, a biology major as well, started all 18 games for the Lions in 2018, and tallied four points behind one goal along with three assists.

In addition, the Albright field hockey team were one of 131 schools to earn the NFCHA/ZAG Field Hockey to earn the Division III National Academic Team Award after having a cumulative team GPA over a 3.0. The team has earned the accolade in three of the last four seasons. 11 Albright field hockey players were also named to the Division III National Academic Squad after achieving a cumulative GPA of 3.3 or higher through the first semester of the 2018-19 academic year. The recipients were: freshman Sydney Baxter, junior Marley Berger, Jennifer and Nicole Crumling, junior Kaley Donmoyer, senior Annette Helmandollar, Lehman, junior Abigail Lord, junior Mia Moshang, freshman Kelly Swanhart, and senior Aileen Taylor.