What’s the State of Hunger in Berks County? 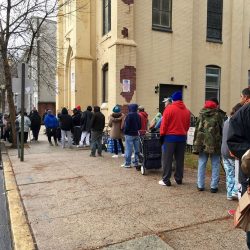 As part of our 25th Anniversary Celebration, Berks County Community Foundation is funding a variety of information projects at BerksVitalSigns.com. The first was a recent independent poll of Berks voters on the future of Berks Heim, the county-owned nursing facility. This report on hunger — a health and well-being issue that affects tens of thousands of our fellow residents — will be followed by at least three more information projects on the following themes: education, the environment, and the economy.

The issue affects tens of thousands of residents.

As the sun began to sink beyond the Schuylkill River, throwing long shadows from the sloping roofs of the buildings in southeast Reading, a line of people formed outside of St. Paul’s Lutheran Church, hoping to avail themselves of its monthly food pantry.

“This is a big help for us,” said Teresa Guzmán, who is 71 years old, disabled and battling bone cancer. “I’ve been coming here for almost three years. What we can afford to buy is not enough to get through the month.”

Others in line agreed about the food pantry services the church provides, once monthly in both morning and evening sessions.

St. Paul’s is just one of 300 charitable food programs that serve Berks and Schuylkill counties. That number has grown from 45 in 1990 to meet the needs of people who find it difficult to afford food. Pantry programs receive 90 to 100 percent of their offerings at no cost from the Greater Berks Food Bank. 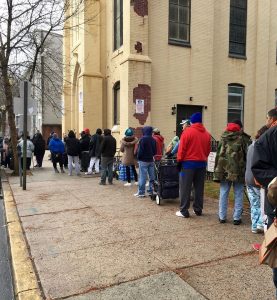 At the same time that the number of food programs was multiplying, the poverty rate increased from 8 percent to about 14 percent in Berks County from 1990 to 2017.

The pantries are part of a safety net that supports the more than 50,000 Berks County residents who live below the poverty line and are eligible to receive SNAP (the Supplemental Nutrition Assistance Program formerly known as food stamps) benefits.

SNAP helps low-income Americans purchase food and reduces food insecurity, according to the Urban Institute, a nonprofit research organization. A recent analysis by the institute found that SNAP lifted 8.4 million people above the poverty line in 2015, reducing the national poverty rate from 15.4 percent to 12.8 percent.

While the safety net continues to help those in need, the number of Berks County residents who live in poverty and receive SNAP assistance has fallen slightly the past few years.

The takeaway is that while there’s been recent improvement in food insecurity locally, there’s still much work to do and many in need.

According to Pennsylvania’s Department of Human Services, there were 57,725 SNAP recipients in Berks County in February 2019, down from 61,644 in March 2018 (a decrease of 6.4 percent). Of these, approximately 14 percent were elderly (age 60 or older), 15 percent were disabled, 41 percent were children (under age 18), and 22 percent were adults age 18 through 59 who are residing in a household with a child under 18. Of those eligible for the benefit, approximately 90 percent make use of it. 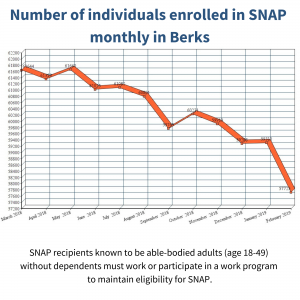 Over the same period, the unemployment rate in Berks County dropped from 5.5% to 4.2%, according to the Bureau of Labor Statistics, and the percent of adult Berks residents with a high school diploma went from 85.1 to 86 percent and those with a college degree went from 23.2 to 23.9 percent.

“While many of the clients that our 300 charitable food program partners feed are SNAP recipients, many more are not,” said Doug Long, the Food Bank’s manager of marketing and development. “For those who do receive SNAP benefits, the assistance is usually not enough. As a result, many SNAP participants, especially those who are unemployed, disabled, elderly, primary caretakers of children, or otherwise have no source of income, find that they still need additional help placing food on their plates.”

“We’ve seen a rise in the working poor,” Long added. “They are working, but … they are working with less income. The food insecurity problem here is very serious.”

“It’s not something just in our urban centers,” Long said. Indeed, of the 54,762 people who live in poverty in Berks County, more than 40 percent (23,371 residents) live outside Reading.

Back at St. Paul’s Lutheran Church, after staff engaged in a quick prayer circle, the doors opened and people filed inside.

“The need out there has increased tremendously,” said Reverend Carol B. Kehler, who has ministered at St. Paul’s since August 1997. “The mid 2000s was when it really increased. For so many people, though they have some employment, it’s an assistance to them.”

“But this is something that’s very important and very necessary,” Pastor Kehler concluded, as the crowd of people, from young to old, helped themselves to the donated food. “We’re grateful to help our neighbors in need.”

After a rapid increase in need for food over the last two decades, followed by a recent slight decline in demand for assistance, it’s difficult to predict where need will go over the next few years except to say that the latest trends are encouraging.

An annual Robert Wood Johnson Foundation study of county health rankings includes a “food environment index.” The index accounts for both proximity to healthy foods and income. It considers the distance an individual lives from a grocery store or supermarket and measures the barrier of cost.

The most recent index gave Berks a rating of 8.7 on a range from 0 (worst) to 10 (best). The range among Pennsylvania counties was 6.9 to 8.9, and top performers nationwide were considered those with a rank of 8.7 or better.

Still, for those in need, statistics don’t mean much.

“Sixty dollars (in food stamps) can go just like that,” said Linda, 59, a food pantry client who declined to give her last name. “I’ve got to come here to survive. I’ve been coming here for a couple of years.”

As part of its 25th Anniversary Celebration, Berks County Community Foundation is funding a variety of information projects at Berks Vital Signs. This report will be followed by at least three more information projects on the following themes: education, the environment, and the economy.

Berks Vital Signs provides information about our community that can be used to improve the local quality of life. The data sets at the website include a variety of ways to compare areas within the county, with surrounding counties, and with the state and nation. This site also serves as a repository for community research, making important reports and documents available in one location.