The Reading Fightin Phils  in conjunction with the Philadelphia Phillies, have announced the club’s 2019 Opening Day roster, which will feature three former first round draft picks in the outfield.

Adam Haseley, Mickey Moniak, and Cornelius Randolph will all open the season in Baseballtown, as the R-Phils will feature the Phillies’ first-round selections from the 2015 (Randolph), 2016 (Moniak), and 2017 (Haseley) drafts. 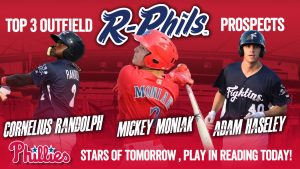 Reading’s pitching staff will feature four top prospects, led by right-hander Adonis Medina. The 22-year-old spent the 2018 season in Clearwater, and represented the Phillies in the MLB All-Star Futures Game. A right-hander with a mid-90’s fastball, Medina struck out 123 batters a season ago, ranking third in the Florida State League, and finished with a 4.12 ERA in 22 outings. 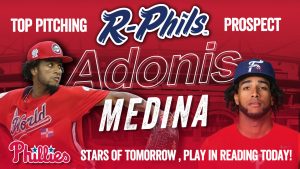 Llovera paced the FSL in strikeouts with 137, and ranked second in WHIP (1.11) and eighth in ERA (3.72). The 22-year-old righty set a career high with 121 innings last year, walking only 34. Seabold opened 2018 in Clearwater before earning a jump to Reading on June 27. The former third-round pick out of Cal State Fullerton posted a 4.28 ERA in 23 starts between the two levels.

Parkinson makes the jump to Double-A after leading all of Minor League Baseball with a 1.45 ERA in 2018. The lefty made 17 starts in Lakewood and five appearances in Clearwater a season ago and dominated both levels, holding opponents to just a .202 average while recording 141 strikeouts in 124.1 innings. Dohy rejoins the R-Phils bullpen after traversing three levels last season. The southpaw ended the season with 18 appearances in Reading, posting a 2.54 ERA overall in 49 appearances between Lakewood, Clearwater, and Reading.

Henri Lartigue and Austin Bossart will handle backstop duties, with Lartigue set to make his Double-A debut after spending 2018 in Clearwater. Lartigue, who was selected in the seventh round out of Ole Miss in 2016, is a switch-hitter and has thrown out 30% in his career. Bossart returns to Reading after batting .273 a season ago.

Darick Hall is back in Baseballtown after earning a mid-season promotion to Double-A last summer. A 2018 FSL All-Star, Hall smacked 26 home runs combined between Clearwater and Reading. In 2017, the first baseman slugged 27 homers for the Lakewood BlueClaws, setting the Lakewood record for home runs and RBIs (96).

Arquimedes Gamboa will be making his Reading debut on the infield, and is rated by MLB Pipeline as possessing the best defensive tools in the Phillies system. Gamboa recorded the top fielding percentage (.971) among qualifying shortstops in the FSL in 2018.

Moniak, the first overall selection in 2016 out of La Costa Canyon High School (CA), batted .270 in 114 games for Clearwater, including a .286 average in the second half. He saw time in big league camp along with Haseley, after both received a non-roster invitation to Phillies Spring Training. Haseley, drafted eighth overall out of the University of Virginia in 2017, combined for a .305 average and 11 homers between Clearwater and Reading a season ago. Randolph returns to Reading after hitting .241 overall (.286 in the second half) across 118 games as a Fightin Phil in 2018. Randolph was drafted 10th overall out of Griffin High School (GA) in 2015.

Manager Shawn Williams heads up the R-Phils squad in his first season in Baseballtown. Williams led Clearwater to a 2018 second-half division title and a 144-131 record in two seasons. Williams, who played professionally in the Tampa Bay Rays organization from 2007-2010, joined the Phillies player development staff in 2013 as a player/coach for the Williamsport Crosscutters, and began his managerial career with Williamsport the following year.

The R-Phils begin the 2019 campaign on the road on Thursday, April 4th at Portland, with first pitch at 6 p.m. The home opener at FirstEnergy Stadium will take place on Friday, April 12th, when the Fightins host the Richmond Flying Squirrels at 7:10 p.m.