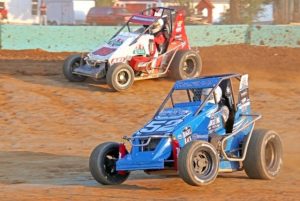 Tim Buckwalter (#52) battling with his cousin, Steve (#56) for the lead in the Dick Tobias Classic for USAC All Pro SpeedSTRs [Lewis Brubaker Photo]

Kutztown, PA (July 24) –  Rain, Billy Pauch Jr., and Matt Westfall had all combined to keep Tim Buckwalter out of victory lane in 2019 SpeedSTR competition at Championship Energy Action Track USA on the Kutztown Fairgrounds. On Wednesday, July 24, however, Tim found his way back to the winner’s circle, and he did it in a big one…the Dick Tobias Classic. The win was worth $5,000 to the Douglassville driver, and it was his second consecutive triumph in the 75-lap Tobias Classic. 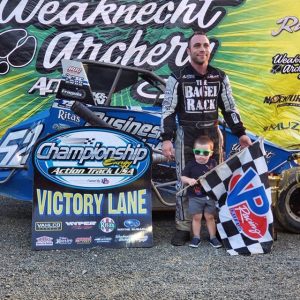 Joining T. Buckwalter as Wednesday winners were Pauch Jr., who picked up his third SpeedSTR victory in the regularly scheduled 30-lapper; Buckwalter, who won his second of the year in Hyper Racing EVO Injection 600 Sprint competition; and Dylan Hoch notched his first victory in the Kutztown Komet 100 for the All Star Slingshots. The win was Hoch’s fourth of the season and 13th career victory at Action Track USA. He is at the top of the list in Slingshot career wins with 13.

The entire event was sponsored by Hoosier Racing Tire and Deka Battery, and it was the final race before next Wednesday’s biggie, the July 31 visit by the USAC NOS Energy Drink National Midget Championship Series! A few days ago, it was announced that Kyle Larson will be competing in the first three USAC National Midget shows – and that includes Kutztown’s Action Track USA – making this a “cannot miss” event and series as the USAC cars and stars take center stage.

Wednesday’s program began with the twice rescheduled Dick Tobias Classic. Ohio’s Matt Westfall jumped into the early lead from his outside front row starting spot. Tim Buckwalter soon raced into second and began to pressure Westfall, a two-time winner this season. Buckwalter had a nose in front as lap two was scored, and Westfall fell back into a battle with Pat Bealer and Brad Brightbill for second position.

Paucn Jr., who started deep in the field, rumbled through the pack and began his assault on Brad Brightbill for fourth. The first yellow flag of the race waved with 11 circuits complete. On the restart, Pauch Jr. moved to third. After the third caution period that came with 30 tours completed, Pauch Jr. continued his pursuit of excellence as he moved past Westfall on the restart to secure the runner-up position. Pauch Jr. began to reel in the race leader as Westfall fell out with mechanical issues with 43 in the books.

A mandatory caution with 50 laps scored allowed the teams to make some small changes because all of the cars were stopped in the infield grass during the break.

On a restart with 53 circuits completed, Pauch Jr.’s mount did not come up tp speed immediately, causing the Milford, NJ chauffeur to lose several positions and Steve Buckwalter, the race leader’s cousin, to have a go at unseating the high flying No. 52. As Steve Buckwalter harassed his cousin for the lead, Pauch Jr. was weaving his way back into contention. Pauch zipped to third by lap 58.

A yellow with six to go would provide an interesting restart. Pauch went way low to dive under both of the Buckwalters on the restart, and his daring move paid off. Billy Jr. was scored as the race leader with three to go. With two to go, Pauch Jr. went into turn one on the bottom, caught a hole, and turned completely sideways. He may have steered out of it, but Steve Buckwalter, running right behind Pauch in second, had nowhere to go and got into the back of the No. 72. All in all, four cars were involved and they were all running in and around the top ten. Tim Buckwalter reclaimed the top spot, with Alex Yankowski, Tim Iulg, and TJ Mayberry battling for position. Timmy went on to win handily, beating Alex Yankowski to the stripe by more than two-seconds. Tim Iulg blasted into third on the final lap, with TJ Mayberry and Alex Bright rounding out the first five.

“I hate it for Billy; he was really good at the end and he would have won but he caught that hole and it ruined his race,” said Tim Buckwalter in his victory lane interview. “I hate to win ’em like that, but…it’s for $5 Grand so I’ll take it.”

In the regularly scheduled 30-lap feature for the SpeedSTRs, the race started out with a nice tussle for the top spot between Briggs Danner and Steve Buckwalter. It was an entertaining, yet stressful slide-fest between the top two, with S. Buckwalter finally gaining command. What a heart breaker for Steve Buckwalter, though, as he suddenly slowed and pulled to the infield with 12 tours complete. That handed the lead back to Danner, but it wasn’t long before Tim Buckwalter challenged Danner for the race lead. Danner ripped the top in three and four while T. Buckwalter hugged the bottom, and they went side by side for the race lead over the next few trips around the clay. T. Buckwalter eventually nosed ahead, leaving Danner to scuffle with Billy Pauch Jr. for the runner-up position.

Pauch gained the position after some hard racing, and Danner bounced off the outside guardrail, giving himself a flat tire. He went to the pits after stopping on the track, bringing out the yellow with eight to go. Now T. Buckwalter and Pauch Jr. danced for the top spot as the laps clicked off in a hurry. Pauch ran the banking to build momentum and it paid off as he got a big run down the backstretch, pulling alongside Buckwalter. Billy was rim-riding up high as he led, albeit narrowly, on lap 28. T. Buckwalter tip-toed around the bottom, leading lap 29 by a whisker, but Pauch again got a big run on the final lap, nosing in front of Buckwalter and going on to win over T. Buckwalter, the returning Michael Bednar, Matt Janisch, and Rick Eckert.

Group time trials were the order of the day, and it was Michael Bednar setting quick time at 11.934-seconds. The Fast Three were Bednar, Tim Buckwalter, and Steve Buckwalter.

A restart with six laps recorded proved beneficial to Tim Buckwalter in the Hyper Racing EVO Injection 600 Sprint main. Driving Barry and Cheryl Greth’s No. 71, Buckwalter darted past early leader Jay Hartman to grab the point on a restart with six down. Fans were watching and cheering for an intense battle for third through seventh positions. Billy Pauch Jr., Billy Koch, Damon Paul, point leader Kenny Miller III, and Christian Bruno waged war with one another before Pauch Jr. finally secured it for good. He moved up to challenge Jay Hartman for the runner-up slot as Buckwalter pulled away.

Tim Buckwalter went on to record his first 600 Sprint win of the year, with Jay Hartman holding off Pauch for runner-up money. Damon Paul wound up fourth and Christian Bruno finished fifth.

The Kutztown Komet 100 honors the memory of the late, great dirt Modified pilot Freddy Adam, who lived in Kutztown. Adam’s widow, Mary, presented Wednesday’s trophy to Dylan Hoch, who has been the dominant driver in the All Star Slingshot division this season.

Hoch started 11th but sliced his way to third by lap 19. The Mertztown, PA wheel-twister made an outside lane, pure power move on Kyle Herve to snatch the top spot on the 28th tour. Jared Silfee, the defending champion of the Slingshots and last year’s 100-lapper, finally prevailed in a duel with Herve for second place. Silfee grabbed the runner-up slot on lap 58. He had chances (on restarts) to overtake Hoch for the lead, but could not pull off the pass he needed, as Hoch’s No. 35 was just too strong on this night. Dave Carraghan, Herve, Scott Neary, and Anthony Raisner fought for third as Hoch maintained a several car length advantage on Silfee.

With the laps winding down, Neary shot into third and Raisner took over the fourth spot, only to have Carraghan steal it back with just a few circuits remaining. At the checkered, it was Hoch winning his first Kutztown Komet 100 over Silfee, Neary, Carraghan, and Raisner.

All of the speedway’s information and news can be found at www.actiontrackusa.com. On Facebook, search for Action Track USA, and it’s www.twitter.com, @actiontrackusa.