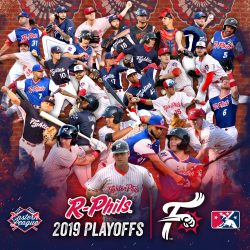 (Reading, PA) – The Reading Fightin Phils secured a playoff berth after Wednesday’s 2-1 victory over the Bowie Baysox. The R-Phils will host the Trenton Thunder in games one and two of the East Division Championship at FirstEnergy Stadium on Wednesday, September 4 and Thursday, September 5 in the best-of-five division series. Both games will begin at 7 p.m.

Playoff tickets are on sale now, and can be purchased in person at the Weidenhammer Ticket Office at FirstEnergy Stadium, online at fightins.com/tickets, or by calling 610-370-BALL.

Game three of the East Division finals will take place at Arm and Hammer Park in Trenton, NJ on Friday, September 6 at 7 p.m. Games four and five (if necessary) will also be in Trenton on Saturday, September 7 and Sunday, September 8.

The Fightins return to the post-season for the first time since 2016, when Reading fell to Trenton in the division series. After finishing with the best overall record in the Eastern League that year at 89-52, the Fightins dropped the first two games to Trenton before rebounding with a 13-5 win in game three. The Thunder secured a spot in the Championship with a 3-2 win in the decisive game four.

The Eastern League announced the implementation of a new split-season schedule prior to the start of the 2019 season. Trenton earned the first half bid in the East, and is the only other team in the division that has not been eliminated in the second half. If Trenton were to win the division in the second half, the second East division playoff spot is determined by overall record, which belongs to Reading (78-56).

America’s Classic Ballpark is proud to be a part of Pennsylvania’s Americana Region and was voted the #1 stadium in all of Double-A by MiLB’s Ben Hill. Follow the Fightins on Twitter at @ReadingFightins and like them on Facebook via www.facebook.com/fightins. Purchase playoff tickets TODAY –  call or TEXT 610-370-BALL.