Terrell Named to D3hoops.com Team of the Week

READING, Pa. – Behind a pair of double-doubles in the past week, Albright women’s basketball sophomore Dejah Terrell was named to the D3hoops.com Women’s Basketball Team of the week, announced by the website late Monday night. 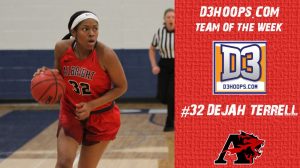 In two dominant wins last week, Terrell scored 18 points in both games and averaged 13.0 rebounds per game. She also posted 4.0 blocks per game, 2.5 steals per game, and 2.0 assists per game between the two games. Terrell opened the week with 18 points on 8-of-14 shooting in an 86-47 win over Penn State Berks last Thursday night. She added 12 rebounds to complete the double-double, and set career-highs with five blocks and four steals. Terrell followed that with 18 points and a career-high 14 rebounds in a 110-43 win over CCNY on Saturday afternoon. She matched her season-high with four assists, while tallying three blocks.

The Berks Catholic product continues to pace the MAC Commonwealth in scoring during the first month of the season with 20.0 points per game. Terrell also ranks sixth in the conference for rebounds per game at 9.8, and for field goal percentage at 52.7%. She leads the team and ranks fifth in the conference with 2.2 blocks per game as well.

Terrell is the first Lions women’s basketball player to be named to the D3hoops.com team of the week since Kelecia Harris was named to it on December 10, 2014.