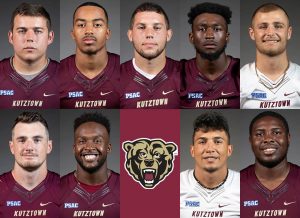 Cella, a senior who started every game at center, and Pilkerton, a redshirt senior that led all tight ends in Super Region 1 with 10 touchdown catches and was second with 666 receiving yards, represented the Golden Bears on the First Team Offense. Cox-Cowan, a senior cornerback that set program career records for passes defended (63) and breakups (51), was named First Team on defense. The three First Team picks are a new benchmark for KU.

The nine all-region honorees are a new program standard for Kutztown, which matched a school record with 11 victories and finished the season ranked 16th in the final American Football Coaches Association Division II Poll. It’s the second consecutive season in which the Bears have set a new program record for Don Hansen Gazette All-Region picks, following last year’s seven.

FIRST TEAM OFFENSE
Matt Cella (Secane, Pa./Springfield) | Sr. | C | Secane, Pa. / Springfield
Cella, a three-year starter and 2019 team captain, directed an offensive line that paved the way for one of the top offensive seasons in 104 seasons of KU football. The Golden Bears set a program single-season record with 33 rushing touchdowns and produced 5,837 yards of total offense –second most in a season all-time. Cella is a three-time All-PSAC selection and is being honored as a Don Hansen Gazette All-Region pick for the second year in a row after earning a spot on the Third Team Offense in 2018. He started all 13 games for the Maroon and Gold. KU’s 3,544 passing yards were its third most in a season, while its 2,293 rushing yards ranked fourth. The Golden Bears allowed the fifth fewest sacks per game in Super Region 1 with 1.31 per game.

Jack Pilkerton (La Plata, Md./La Plata) | RSr. | TE | La Plata, Md. / La Plata
A threat in the passing game during all three of his seasons with the Golden Bears, Pilkerton exploded for career-highs of 44 catches, 666 yards and 10 touchdowns in 2019. Though he was a surprise PSAC East Second Team selection, Pilkerton’s fantastic season was validated with All-America Second Team honors from the Associated Press. Pilkerton’s 10 TD catches were tied for fourth most in a season in KU history and he finished with four multi-score games.

Abdul-Hassan Neblett (Newark, N.J./Paramus Catholic) | RSr. | RB | Newark, N.J. / Paramus Catholic
Thrust into the starting role at running back following the graduation of Reynolds, Neblett responded with a career year. The redshirt senior from Newark, New Jersey, became just the 10th Golden Bear to rush for 1,000 yards in a season (1,059) and first since Reynolds in 2016. He led KU with a career-high 12 rushing TDs –tied for seventh most in a season in team history– and also produced a career-high 48 receptions for 373 yards and two scores. Neblett averaged a career-best 6.7 yards per carry and 81.5 rushing yards per game in collecting All-PSAC East First Team honors. This is his first selection to a Don Hansen Gazette All-Region team.

THIRD TEAM OFFENSE
Justin Tindull (Seven Valleys, Pa./Dallastown) | OT | RSr. | Seven Valleys, Pa. / Dallastown
Tindull repeats as a Don Hansen Gazette All-Region Third Team pick after starting all 13 games at left tackle for the 11-2 Golden Bears. He was a catalyst up front as Kutztown battered opponents for more than 5,800 yards of total offense and 35.5 points per game. The Golden Bears’ pass protection was among the best in Super Region 1, ranking fifth with just 1.31 sacks allowed per game. Tindull and the o-line also helped KU rank eighth in SR1 in passing offense, ninth in scoring and 11th in rushing offense. He racked up 43 career starts, including 34 straight to close out his career. Tindull is also a two-time All-PSAC East selection.

Shawn Turber-Ortiz (Northumberland, Pa./Shikellamy) | RJr. | S | Northumberland, Pa. / Shikellamy
One of the nation’s top tacklers and a crucial part of Kutztown’s secondary, Turber-Ortiz blew past 200 career tackles with 73 through the team’s first seven games. He also had four interceptions and was named PSAC East Defensive Athlete of the Week three times before suffering an injury on the opening possession of the Shippensburg game, Oct. 26, that limited his availability the rest of the way. Turber-Ortiz still ranked in the top 20 in Super Region 1 with 5.0 solo tackles per game and claimed a spot on the All-PSAC East First Team for the second straight season. This is his first all-region honor. With 248 tackles and 13 interceptions thus far in his career, Turber-Ortiz ranks in the top 15 in both categories at KU.