Royals’ goaltender Kirill Ustimenko blocked 18 shots in the first period and 33 for the game to stymie the Worcester Railers, 3-0, on Sunday, February 16 in Santander Arena. Ustimenko has two career shutouts (Nov. 16 vs. WHL), both of which have come at home and when making at least 30 saves.

The win extended Reading’s winning streak to six games and kept them in second place in the ECHL’s North Division. 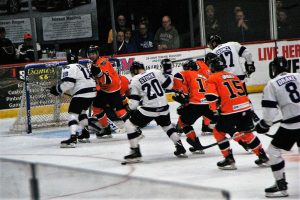 A massive charge to the net as Royals Marly Quince’s shot laid loose in the Worcester crease after a Jakub Skarek stick save. 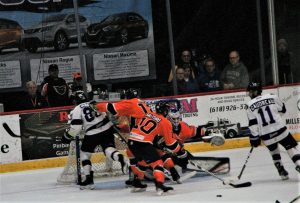 Reading Corey Mackin gets crosschecked by Railers D Jack Macnee as a Reading shot heads to the net. 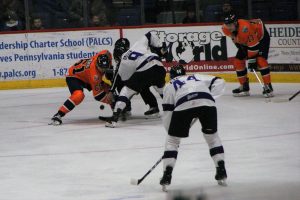 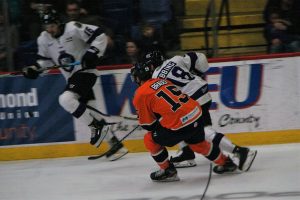 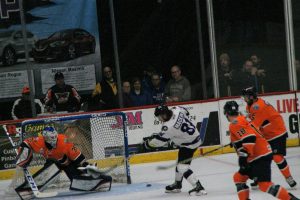 Corey Mackin’s shot gets blocked by Railers G Jakub Skarek only to have the rebound put in by Steven Swavely. 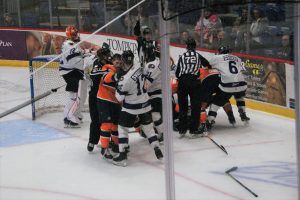 Reading G Karill Ustimenko watches the action around the Reading net which resulted in offsetting penalties. 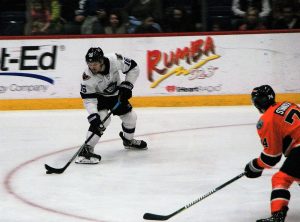 Worcester’s Jack Stander looks to keep Reading’s Hayden Hodgson from getting a shot to the net late in the 3rd period. 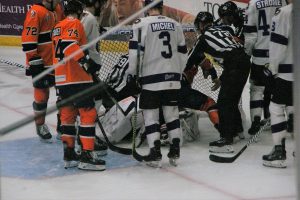 Linesmen try to pull Worcester D Justin Murray off of Royals G Ustimenko after Murray crashed the net and Ustimenko stood his ground.