Nature, along with Berks County, moves into yellow phase

Just as Gov. Tom Wolf recently moved Berks County into the yellow phase of re-opening in an effort to mitigate the spread of the novel coronavirus, so, too, has nature followed.

Right now in a corner of Eckville in Albany Township, a 77-acre field has erupted with the golden blossoms of lance-leaved coreopsis, brightening the landscape for nature lovers weary with the stay-at-home nature of the pandemic fight.

Nearby Hawk Mountain Sanctuary has reopened its trails with restrictions this week as the county moved to the yellow phase, and that has become a draw for those wanting a taste of the larger Berks outdoors.

But at the bottom of the mountain on the Berks side along Hawk Mountain Road is the Bolich Farm, a relatively new addition to the State Game Lands 106. 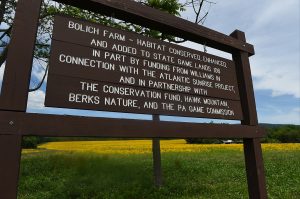 That farmland was purchased recently through a partnership with Hawk Mountain Sanctuary, The Conservation Fund, Berks Nature and the Pennsylvania Game Commission.

Funding was provided in part by Williams in connection with the construction of the company’s Atlantic Sunrise natural gas pipeline project.

This is the second season for the pollinator friendly plantings at the site that the game commission has undertaken at various tracts in the county.

Now in bloom in addition to the coreopsis are hairy and foxglove beardtongue, Rudy said.

“Although the butterflies are different and less numerous at this time of the year, the farm is quite a spectacular sight and well worth a visit if you’re looking for something beautiful in nature and still avoiding people,” he said.

It isn’t just flowers and butterflies that will be helped by the Bolich Farm.

Right now, those birds are relatively local in distribution and are affected by early cutting of fields.

Having native grasses that aren’t tied to a cutting schedule will only help with the propagation of these birds.

Travelers to that part of Albany Township can pass through Lenhartsville on the trip north and take in the progress of the Dreibelbis Station Covered Bridge.

And in one discrete ecological niche near Lenhartsville is the only stand of naturally occurring prickly pear cactus in Berks and one of the few in the state. 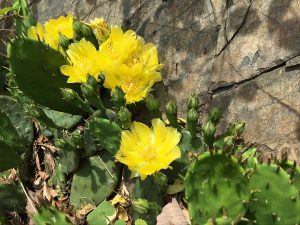 Prickly pear cactus blooms in the only naturally occurring stand in Berks County and one of the few in the state near Lenhartsville.
Photo by Bill Uhrich

The cactus has begun blooming with its bright, golden flowers.