From The Office of the PA Auditor General 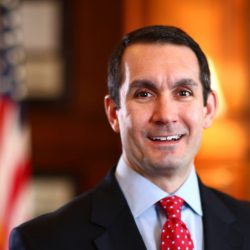 “This monument is the first on our Capitol grounds to specifically honor men and women of color, recognition which is long overdue,” DePasquale said. “It will help future generations to understand the many contributions of African-Americans to our Commonwealth.”

The monument features a relief map of the old 8th Ward and lists the names of former residents. It is flanked by statues of Frances Harper and William Howard Day, two prominent Pennsylvania residents who were leaders in the 19th century abolitionist movement.

DePasquale noted that Mr. Day worked for the Department of the Auditor General in the 1870s. The Finance Building, in which the department is now located, stands on land that was part of the old 8th Ward.

“Born in 1825, William Howard Day was an educator, a minister, a newspaper editor – in many ways, a man ahead of his time,” DePasquale said. “As an outspoken abolitionist and advocate for civil rights, his writings and advocacy helped to advance the fight for social justice and equality – an effort that continues to this day.”

DePasquale was honored to receive the inaugural William Howard Day Award in 2016 from the Pennsylvania Public Education Foundation. Learn more about the Department of the Auditor General online at www.PaAuditor.gov.