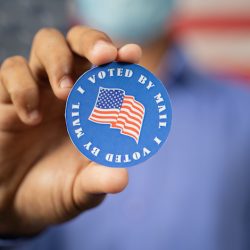 HARRISBURG, Pa. — A new report suggests the record number of mail-in ballots for this election will take more time to count and may shift election results as they are tallied.

More than three million Pennsylvanians requested mail-in ballots for today’s election, and by Monday almost 2.5 million had been returned to county election offices.

“Even though a lot of counties have ramped up the number of people they’ve hired to help process these, it’s still very time-consuming and many counties won’t even start to count their mail-in ballots until after Election Day,” Kovach explained.

In her report, she urged voters to be patient, noting that it took six days to count mail-in votes for the June primary and three weeks to certify the results.

Kovach said Pennsylvania Democrats are three times more likely to cast mail-in ballots than Republicans, causing what is known as a “Blue Shift” toward Democrats as those ballots are counted.

“Pennsylvanians should be wary of early pundit projections or any candidates from any party claiming an early victory,” Kovach cautioned. “Especially on Election Night because every eligible ballot that is cast must be counted.”

She said the record number of mail-in ballots for this election means the tally could change significantly as those are counted in the days after Election Day.

Kathy Boockvar, Pennsylvania Secretary of State, urged county election officials to include the number of uncounted ballots and to update their totals as mail-in ballots are counted.

Kovach believes that will give voters a clearer picture of the process.

“If you report the mail-in ballot counts along the way rather than all at once, it would really help prevent a jarring, instant swing in election results which Americans aren’t really used to,” Kovach suggested.

She added shifts in results as votes are counted are not a sign of fraud, but rather a clear indication that our democracy is working.