The Understory: Do Good 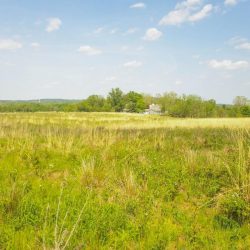 Approximately 66 years later and Martha Coyle remembers that morning clearly. Ed Scheffey – “Pappy” to Martha – was on his way to visit Dr. John Pratt, know to the family as “Doc Pratt”. Ed did this rather frequently, at least once a month, so this trip in itself was not terribly surprising. But on this morning, Ed motioned to Martha excitedly,

“Hey, take a look in that bag!” Peering inside young Martha saw wads of cash – the bag was filled with money.

To this day, Martha still possesses the old bank book in which the initial withdrawal used to purchase the farm is recorded. She remembers the significance of that final payment, the unyielding persistence and work ethic of her Pappy realizing his dream, and the path her own life took thanks to life on Willit Run Farm.

Ed Scheffey had always wanted a dairy farm. He began saving his money fastidiously while working full time as a master carpenter and part-time at a dairy in Pottstown with the hopes of ultimately buying his own land and herd to tend someday.

But as a newlywed living with his in-laws and with no property to his name, Ed couldn’t find a bank willing to give him a loan. As luck would have it, the large animal veterinarian who serviced the Pottstown dairy herd, Dr. John Pratt, caught wind of Ed’s dairy dreams and approached him with a proposition.

Ed first met Doc Pratt as a boy of 9 while assisting with the daily milk deliveries. As a boy, Ed had held the reins of the milk wagon’s work horses, keeping the team in line while the men dropped off the milk. Now as a man 35-years grown, Ed encountered Dr. Pratt more and more often through their work at the Pottstown dairy.

It was here that Dr. Pratt came to know the hard-working man that eager boy had become. Where banks saw a liability, Dr. Pratt saw a good man with a bright future: a worthy investment if there ever was one!

In May 1940, with financial support from Dr. Pratt, Ed and his wife Esther purchased their farm, a property hand-picked by Ed himself: 94.5 acres in Union Township just south of the Schuylkill River. The farm had raised pigs since the 1800s (even as late as 1937, a small city of pig stalls, arranged in a grid, still occupied the farm’s northwestern field.) The land was heavily farmed and intersected by a narrow creek, which meandered gently north towards the Schuylkill River.

It held promise, it held potential, and most of all, it held water. Ed knew the success of his dairy would rely in no small part on the vitality of the property’s narrow creek, as this was the primary source of water for the pasture and Ed’s herd. Ed’s biggest question then, when surveying his land, was posed at this stream: “Will it run?” he asked.

It was here that Martha and her brother John grew up, nurtured and profoundly shaped by the farming partnership modeled by Ed and Esther (their uncle and aunt by blood who, due to family circumstances, became their adoptive parents).

Life on Willit Run Farm operated on one simple rule: do good.

“You do things the right way or not at all!” Martha recited, “You work together.”

Thus, tending the farm and its herd of over 35 cows was a family affair. Farm chores were constant work, but never felt burdensome, and the operation was lucrative enough to provide Martha and John with everything they needed to enjoy their youth.

Martha remembers fondly receiving a pony for her 8th birthday, which Pappy paraded right through the front door into the house for a show-stopping entrance. Likewise as a birthday surprise, young John received a near-indestructible, aluminum rowboat for peaceful floats on the farm’s pond, which lives on today.

Doing good extended beyond the boundaries of Willit Run Farm. Following each heavy snow fall, Ed would wrap himself in his sheepskin coat, climb onto his tractor (which he had fitted with a plow), and then, without complaint or prompting, plow out every neighbor in the area.

To do good you worked together; together meant community, and community included the land.

Though at the time, Ed did not self-identify as an environmentalist, his life was guided by a deeply rooted stewardship ethic.

Ed treated his herd like pets – as fellow family members – and tended the land with care, employing contour farming and crop rotation to prevent erosion and maintain the soil’s integrity. The farm’s footprint was actively mediated by Ed who always disposed of hazardous compounds properly, used chemicals in moderation, and recycled everything and anything.

Water remained forefront in Ed’s mind, particularly the health and sustainability of the pasture’s creek which watered the family’s more than 35 cows and Ed’s team of work horses – his hobby after falling in love with these impressive equines as that young boy riding the horse-drawn milk wagon.

With assistance and planning from the Berks County Conservation District, Ed installed an innovative diversion ditch following the natural contour of his land, which, following heavy rains, intercepted surface runoff and guided it safely towards the creek. Doing so slowed the rainwater down, abating its erosive power, which protected Ed’s topsoil and the creek itself. To this day, the farm’s soil remains rich and healthful according to the Berks County Farm Service Agency’s standards.

When Martha and John inherited Willit Run Farm, they committed themselves wholly to upholding their Pappy’s legacy of “doing good”.  Now, over 60 years after that triumphant final mortgage payment, Willit Run Farm celebrates another incredible milestone, this time pioneered by Martha herself.

In 2007, Martha reached out to Larry Lloyd at Berks Nature (the Berks County Conservancy, at the time). She had noticed a trend that disturbed her: all around, farms were folding to development pressures. Even while rows of corn stood tall still, developers were fast to move-in after a sale. This was a future Martha could not accept for Willit Run Farm.

The best way, Martha decided, to protect her family’s legacy, would be to place the farm under a conservation easement, which would prohibit or severely limit future subdivision and development of Willit Run Farm. At the time, circumstances prevented Martha from easing all 94.5 acres of the farm, so she settled on an easement to protect 29.5 acres along the property’s southeastern border.

Martha still dreamt of ultimately protecting the entire farm but found other ways to “do good” in the interim. 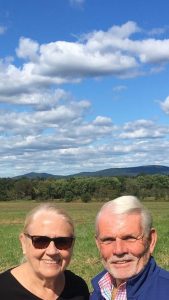 All smiles from Martha and Richard Coyle at Willit Run Farm

In 2002, Martha, her husband Richard, and brother John enrolled the farm in the USDA’s Conservation Reserve Enhancement Program (CREP) – an incentive program that rewards farmers for implementing intuitive conservation practices in lieu of agricultural production.

Instead of actively farming their land, the Coyles have cultivated a native grassland and planted a streamside forest to buffer the small creek. This habitat supports native wildlife, reduces erosion, and improves the resiliency of the entire watershed.

Then in September 2021, after 15 patient years, the conditions were ripe for change. Working with Berks Nature and with funding provided by WeConservePA, the Coyles successfully amended and restated their conservation easement, this time on the entirety of their 94.5-acre farm.

By blocking development in perpetuity on Willit Run Farm, the conservation easement ensures safe passage of Martha’s heritage forward into the next generation. The land will remain in Martha’s family as a living precedent of responsible stewardship.

Willit Run Farm looks decidedly different today than it did when Ed first purchased the farm in 1940.

The pigs are long gone as are the cows Ed and his family used to keep. Once treeless, patches of woodland now shelter the shallow creek that bisects the property. Growing across the 80 acres of farmland are not crops but native grassland plants; feathered stands of tall bright grass swaying leisurely among white-petaled perennials.

But the heart of Ed’s conservation ethic still beats.

The grasslands lush with native plants provide habitat for local wildlife; the stream that once watered Ed’s herd is now kept cool and clean by the surrounding woodland, benefitting downstream neighbors on the Schuylkill River who rely on this water to drink; and the conservation easement, now encompassing all 94.5 acres of the farm, ensures that this ecosystem will continue to flourish and support its community of people and wildlife alike for generations to come.

Furthermore, the impact of this conservation action will be felt well beyond the boundaries of Willit Run Farm. The farm is part of the Hopewell Big Woods, one of the most important natural landscapes in the region known for its vast expanse of unbroken forest, scenic viewsheds, and pristine, Exceptional Value streams.