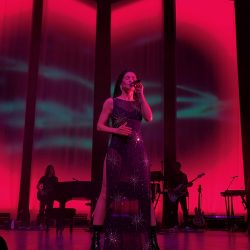 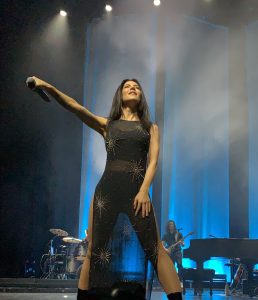 Despite a minimalist set design, MARINA knows how to captivate and engage an audience.

The 36-year-old Welsh singer, formally known as Marina and the Diamonds, made a return to Philadelphia with her Ancient Dreams in a Modern Land Tour. Even on a rainy Tuesday, fans excitedly gathered hours before the show to get a close view of MARINA.

As showtime neared and the house lights went down, the MET filled with thousands of screams from both teenage and adult fans alike. Wearing a black sequenced dress and chunky-heeled latex boots, MARINA began the setlist with the titular track to her latest album, which is also the name of the tour.

The next song, “Venus Fly Trap”, was a drum-heavy hit that got the crowd singing their hearts out, despite wearing masks. This track was a personal favorite for the night.

Further into the set, MARINA performed a common fan favorite, “Are You Satisfied?”, which she spoke about briefly before singing.

“Philly, I’m gonna play a song from The Family Jewels, which is now 12 years old as of last week,” MARINA told the audience with a cheeky grin on her face. “I’m very proud of her.” 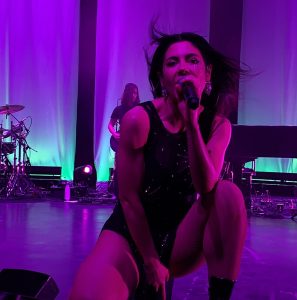 The debut album was released in 2010 under the stage name Marina and the Diamonds. It is easily her second most streamed record to date, just behind the elusive Electra Heart.

One of the songs that got the crowd rhythmically throwing their hands in the air was, “Oh No!”. MARINA’s dance movements during this track were almost robotic, but that is one of her many quirks as an artist. The way she moves her body is one of the many reasons MARINA has gained a dedicated fanbase. She is perfectly weird, just like the rest of us. Not many singers show this side of themselves.

“Hollywood” had fans shouting at the top of their lungs, especially during the spunky and iconic lyric: “He said, ‘Oh my god! You look just like Shakira. No, no, you’re Catherine Zeta.’ Actually, my name’s Marina!”

During “Teen Idol”, MARINA glowed under deep blue lights. While the track itself discusses matters of teenage mental health, no one had a problem singing the lyrics loud and proud. Ask any fan of MARINA and they will admit that the song was a relatable part of their formative teen years. It was even certified Gold in the United States just a few weeks ago. 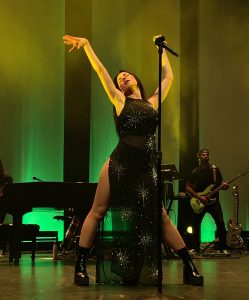 With her hair blowing behind her under yellow lights, MARINA sang “Highly Emotional People.” It begins as a soft piano ballad, but soon transforms into a large-scale production. Towards the end of the track, there is a ton of synth in the background, which made the performance all that more ethereal.

MARINA, most famous for her electro-pop style tracks, ended the setlist with “How to Be a Heartbreaker” and “Bubblegum B—-”. These two songs made the crowd jump up and down with the beat. There was not a single fan buzzing with glee by the end of the performance.

Both songs, released with her 2012 album, Electra Heart, have recently gained traction on the social media app, TikTok. This is not the first time MARINA has found rising fame on social media. Most fans will probably agree that she was a quintessential part of the “Tumblr era”.

MARINA left the stage for a brief moment then returned in less than two minutes. She performed her track, “Goodbye”, to fittingly close the show. Even though the lyrics of the closer were a farewell, fans were more than ecstatic to see her perform a one-song encore.

Thankfully, MARINA made sure to mention that she would return to Philadelphia in the future, so this definitely is not goodbye. 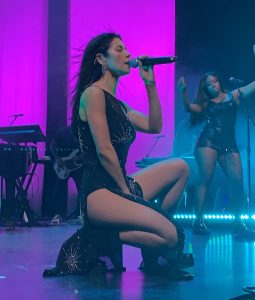 You can find more information about upcoming tour dates here.