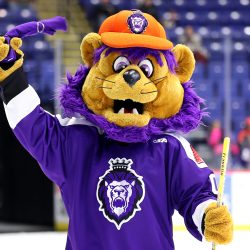 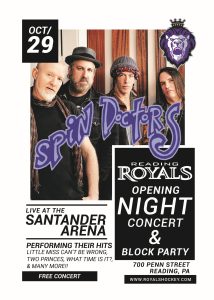 The Reading Royals, proud ECHL affiliate of the Philadelphia Flyers and Lehigh Valley Phantoms, announced Monday that the Spin Doctors will be performing at the Opening Night Block Party before the team’s home opener against the Indy Fuel on October 29, 2022 at Santander Arena.

The band is best known for their early 1990’s hits “Two Princes” and “Little Miss Can’t Be Wrong,” which charted at the top of the Billboard Top 100 list at No.7 and No.17, respectively. Additionally, the band was nominated for a Grammy Award for Best Rock Performance by a Duo or Group with Vocal for “Two Princes” at the 36th Grammy Awards.

The concert is a free show at the team’s block party event. Tickets to the game beginning at 7:00 p.m. can be purchased by visiting the Royals’ box office at Santander Arena or by calling 610-898-7825.

The Reading Royals, proud affiliate of the Philadelphia Flyers and Lehigh Valley Phantoms, are entering their 21st season in the ECHL. They won their first Kelly Cup championship in 2013 and have clinched playoff berths in 11 of the previous 12 seasons. They are five-time division champions and were the 2021-22 Eastern Conference champion. The Berks County Convention Center Authority (BCCCA), founded in 1996, owns the Royals and oversees operations at Santander Arena.