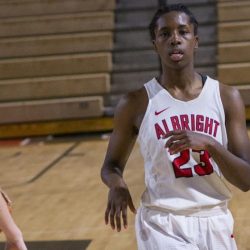 Lofton led the way for the Lions in their 65-58 non-conference road win over King’s on December 17 with a game-high 21 points, on 8-of-16 (50%) from the field, and posted a team-high nine rebounds with seven of them being defensive. She added a career-high eight assists along with two blocks and two steals in the win. Lofton also played a key role from the free throw line by making three of four attempts on the afternoon.

The Warrington, Pa. native now ranks seventh among MAC Commonwealth teams with 8.0 rebounds per game and is tied for fourth with 3.8 assists per game. Lofton also ranks 10th in the conference in scoring at 12.3 points per game, while ranking fourth in steals per game with 2.3 and third with 1.7 blocks per game. This is the fourth time in her Albright career that Lofton has earned player of the week honors, and second time this season. Albright now has won three of the first five women’s basketball player of the week honors in the MAC Commonwealth this season.

The Lions will return to action Wednesday, December 20th as they will host Stockton in non-conference action for a 5 p.m. tip-off.