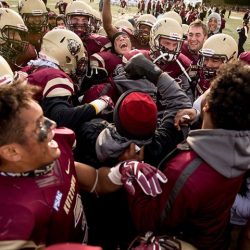 KUTZTOWN, Pa. – Five members of the Kutztown University football team were voted to the Don Hansen Gazette All-Super Region One Team on January 17.

Junior linebacker Tajier Jefferson and sophomore cornerback Ahkee Cox-Cowan were named All-Region Second Team on defense, and will advance to a national ballot from which the 2017 Don Hansen NCAA Division II All-America team will be named later this month.

Jefferson finished the season leading KU in tackles with 86, ranking 13th in the Pennsylvania State Athletic Conference (PSAC), starting all 11 games. He was also 12th in the conference in tackles-for-loss with 12.5.

Jefferson, a team captain, was named to the All-PSAC East First Team for the second time in his career, and to the D2CCA All-Region Second Team. He has racked up 236 career tackles, 15th in program history. In the season-opener against Assumption on Sept. 2, Jefferson tallied a career-high 15 tackles with an interception and a forced fumble.

Cox-Cowan started all 11 games, finishing fourth on the team in tackles with 56, broke up 17 passes and had three interceptions this season. His 20 passes defended were a school-record and ranked second in the PSAC, while the 1.8 passes defended per game and 20 total passes defended ranked third nationally in Division II.

The Harrisburg native has 30 career passes defended, ranking eighth in program history. He tied a career-high with eight tackles against Assumption, including three pass breakups.

Garbarino played in all 11 games in his final season in Maroon and Gold, making 10 starts. He finished 2017 with six catches for 92 yards and one touchdown, including his first career catch in the season opener against Assumption.

The Peckville native was named to the All-PSAC East First Team.

Reynolds continued to shine in his second season as the featured running back. The team captain played in eight games before suffering an injury, and finished the season with 1,127 all-purpose yards, earning his second consecutive First Team All-PSAC East selection. He had109 rushes for 456 yards and four touchdowns, 29 receptions for 410 yards and five touchdowns, four kickoff returns for 108 yards and nine punt returns for 153 yards and one touchdown.

The Willow Grove native led Division II with 335 all-purpose yards in Week 1 vs. Assumption, second-most in school history. He had 133 rushing yards and two touchdowns to earn him the PSAC East Offensive Athlete of the Week (9/2).

Krcic finished his redshirt-freshman season with 47 punts that totaled 1,988 yards and a 42.3 average, second in KU history in punt yard average in a season.

The Saylorsburg native was named to the All-PSAC East Second Team, and after holding a 45.6 average with two 50-yarders and one punt inside the 5-yardline against Bloomsburg on Oct. 7, he was named the PSAC East Special Teams Athlete of the Week.

Kutztown had its fourth consecutive winning season under head coach Jim Clements, finishing 2017 8-3 overall and 5-2 in the PSAC. The eight wins is the most since the 2011 season when KU won 11 games.