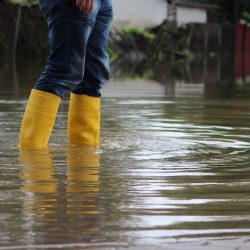 In 2018, extreme weather in Pennsylvania caused $144 million in property damage, and $125 million in damage to state-maintained roads and bridges.

Gov. Tom Wolf has set the wheels in motion for the Keystone State to join nine other states in the Regional Greenhouse Gas Initiative (RGGI).

At a morning news conference on Thursday, the governor noted that climate change made 2018 the state’s wettest year on record, and scientists predict the average temperature will rise more than 5 degrees Fahrenheit by 2050.

“We know what’s causing this climate crisis, and we know that if we don’t get control over the emission of greenhouse gases like carbon dioxide, the extreme weather will only get more extreme.”

Wolf signed an executive order directing the Department of Environmental Protection to develop a rule to put a cap on carbon emissions from the power sector. Pennsylvania is the third largest source of greenhouse gas emissions of all the states.

Mandy Warner, senior manager of climate and air policy with the Environmental Defense Fund says RGGI has a proven track record of bringing those emissions under control.

“The RGGI states combined have reduced carbon pollution from the power sector by over 45% in roughly the past decade,” says Warner.

She says those states are anticipating another 30% reduction in carbon emissions in the next ten years.

The initiative sets annual caps on carbon emissions and auctions pollution credits to the power industry. According to Warner, those sales have returned some $2.8 billion to the RGGI states since 2009.

“We’ve seen a lot of consumer benefit from programs like energy efficiency deployment, at the same time that you’re getting those really deep carbon emission reductions,” says Warner.

The governor estimates it will take about two years for the Commonwealth to formulate and implement the rules necessary to be part of the initiative.